K's school have combined World Book Day and Red Nose Day this year, meaning you only have to do one day of dressing up etc. This is a good plan as they're so close together, and it gave us plenty of time to let rip with our creative efforts. K is a huge fan of Winnie The Witch, written by Valerie Thomas & Laura Owen and illustrated by Korky Paul; and so am I, for that matter. Korky Paul's attention to detail is something I really admire, and having a familiar character who goes with you from picture books to longer-form stories has been a great help in building K's reading confidence. When you're five with a reading age of nine, it's very hard to find the right books and Winnie has done us proud.


(I wish I could get a bigger image here so you can compare but I don't want to fall foul of copyright and I don't understand "fair use" regulations so please go to Winnie's Official Website to compare our effort to the original illustrations!)

We also went to see the Watershed Theatre production of Winnie just after Christmas - that was amazing, do go and see it if it tours near you! Watershed are really one of those theatre companies it's worth going to see any time, whatever they're doing. A lot of what's aimed at children feels like it's second-rate because "kids won't notice". Well, they do - and I do - and Watershed never skimp on the details.

I was a bit dubious when K first suggested Winnie as her costume because it really is quite complex - I know my sewing skills definitely aren't up to making it from scratch (especially having seen the Watershed-made costumes recently!). Then I remembered her older cousin had given her a bagful of outgrown dance costumes (thank you R!), one of which was blue with a pleated skirt. That was all I needed to get my brain churning on how I could adapt it and add the accessories. Because just as Watershed never skimps on the detail, neither does K. She is a tough task master and a stickler for detail, so it's a good job I'm a slightly obsessive crafting nut, ahem.

Here is her completed costume, and I'm going to describe each step we took in case they're useful for anyone else in the future. I also think it's a great journey piece, pulling together lots of different crafting techniques and ideas. I'm quite proud of what I've managed to do here, and whilst it may be a bit OTT for a school costume to some people, I've really enjoyed it and K's very happy. Which, in the end, is what's important, no? 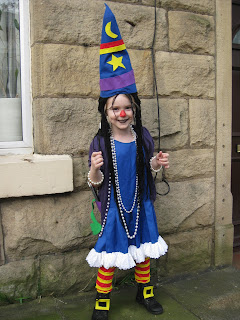 The completed outfit
Dress Frill
First things first: you'll need a blue dress to cannibalise and pretty much anything will do. Could I get the frill on the dress? Yes, it turns out - 8m of lace later! I got this as an offcut from eBay, it's 14cm wide stretch lace and I just scrunched it as I stitched it to the bottom of the skirt; stitching along the middle of the lace so it flopped over and made a double row of frill. Between the pleats and the weight of the lace it twirls beautifully - an added bonus K was chuffed with! 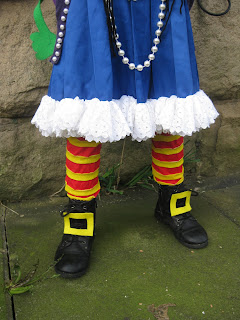 Dress frill, tights and shoe buckles
Red & Yellow Tights
Next up, those tights. Have you any idea how impossible it is to find red and yellow striped tights? Go on, have a Google. There just aren't any. But having stitched the lace on, I wasn't going to let the seemingly impossible beat me. I batted around various ideas with my mum, like hacking up yellow leggings and stitching them onto red ones; but eventually decided on buying red and white striped tights. These are easily obtainable from costume shops (I got ours via Amazon as the nearest fancy dress place had sold out), and then we painted them with yellow fabric paint. Well, that was quite a job - if you ever need to do it, stuff the tights with plastic bags (turn the bags inside out or you get ink transfer from the print) and make sure you have somewhere you can hang them to dry. And three spare evenings. And an extra pair of hands (I roped in A for this job; thanks love!).

Shoe Buckles
The buckles were a last-minute idea - I'd racked my brains for weeks trying to work out how to come up with blue, gold-buckled pointy shoes which a 5yo could still run around the playground in. Sadly this bit defeated me - if I'd had another week I'd have tried to make a felt overlay, but the weather's so unpredictable it probably wouldn't have been worth it. Last night it occured to me I could still make buckles, though. Cut two yellow rectangles of felt, and two black ones the same size. Now cut out a square from the centre of each yellow square, making sure to line this up with where the shoelaces are. Glue the yellow to the black, pierce holes in the black and thread through the laces, knotting securely behind. Voila, shoe buckles. 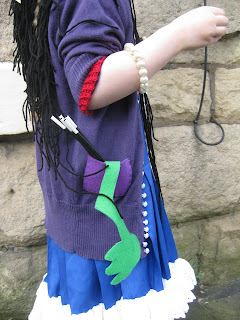 Cardigan
Winnie's cardigan is adorned with little pearl buttons - I don't know if Korky Paul did this deliberately or what, but they're actually on the wrong side for a woman's cardigan! Again, you'll need a purple cardigan to cannibalise - go for a big size (this is an 11-12) and you can probably find one on eBay for a quid just as I did. Ditto the buttons; 20-odd 7mm ones here just stitched along the edge.

Pocket Contents
I forgot to check if the cardigan I'd bought had pockets, doh! So I just stitched on a felt one. Winnie often carries a frog around with her - just draw a leg and webbed foot onto green felt and stitch it down to the top of the pocket. She also carries lots of wands and I was a bit worried about this, not wanting to get K into trouble for any poking-with-sticks shenanigans. Then I hit on the idea of black plastic straws - safe and light to carry and not likely to hurt anyone accidentally. I just painted the ends white (in retrospect I would use acrylic paint or a poster paint/PVA mix because just poster paint alone did start to flake off early on).

Red Ribbed Cuffs
This is where we're getting deeply obsessive now, be warned. Winnie's purple cardigan has red cuffs! Good grief. I made these by crocheting as follows (UK instructions):

Ch5. Dc in 3rd ch from hook, dc to end (3 st). Ch1, turn. Dc in back loops only (3 st), ch1, turn, and do this for as long as strip as you need to go around the cuff. Double crocheting in the back loop only gives you the ribbed effect, and was inspired by the trim on the jacket I made for K's monkey. Thanks to Crochet For Bears To Wear for that one. 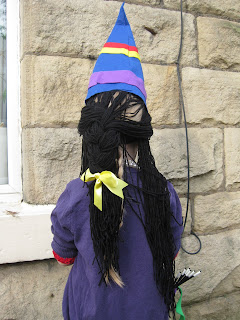 Wig
This was probably the most difficult part of the outfit, and next time I think I'd look into buying one. It's worked ok, but it's not so easy to keep on (K has been in school for an hour now and I'm guessing it's already been abandoned!). I just used loads of black yarn knotted around a soft stretchy Alice band, then plaited the back and added a wide yellow ribbon a la Winnie.

Hat
A real challenge - you'd think a conical hat would be simple, but no (it probably would have been if I'd made it from card!). A felt cone, reinforced with stiff interfacing and glued together with lots and lots of PVA gives it shape, with a sneaky stitch and some twisting of the end as it dried to give it that devil-may-care trailing end. Then stripes and shapes of felt glued over the top. If I'd been able to excavate my sewing machine, and had time to sew during the day when not baby-wrangling, I'd have cut the stripes out as curves and appliqued everything together. So this is a bit of a bodge job and is held on through stitching to the wig hairband, elastic, and lots of hope. 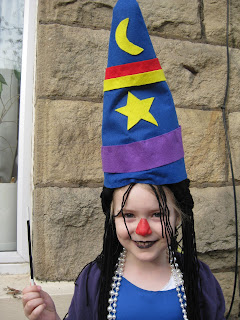 Finally, we added two long fake-pearl necklaces and bracelets (from Primark, ethical gods forgive me; ideally you want to dig these out from a charity shop or somesuch), and Snazaroo face paints for Winnie's long red nose and black lips. One more thing I'd like to have put with it - an amigurumi cat like the one I made for the Cat Swap last year - Winnie needs her beloved Wilbur. But I remember that took two week's worth of evenings to make. Maybe there'll be one in K's stocking at Christmas.

Abracadabra!
Posted by Caroline at 09:00

love it!
wow you are a good Mummy to go to all that trouble for perfect details :)
my son's school combined the two events too - he went as Doctor Who in Matt Smith mode :)

WOW!!!
What a dedicated Mummy.
Gemxxx

*faints*
Seriously?! Wow. Erm, I'd have to rewrite some of it - the buckles particularly, since they really need fabric glue or stitching to stay in one piece, and I found a tutorial recently for papier-mache pointy toes (not that they would have been practical in the playground, but good for a party!). But yes, absolutely, with a few tweaks you'd be very welcome to share it.