Hurray, Sekrit Project #2 is also confirmed as safely arrived. So now I can show you our decoupage on a larger scale! 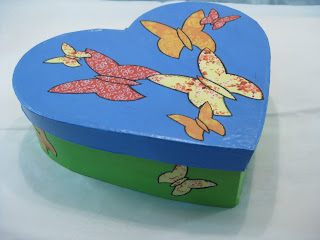 This is a gift for the lovely Dr J's birthday. I've been wanting to make these gorgeous peppermint fondant hearts from the Flossie Teacakes blog for ages, but I know I'd just snarf down the entire batch in one afternoon and regret it, so the majority had to be going out of the house to someone else. When I suggested making them for J's birthday on our way to Hobbycraft for the Spring Ring, K said "It'll need to have a nice box. Can it have butterflies?". Of course I said yes, and floated the idea of a heart-shaped box (not entirely randomly, given the fact that K had attempted to bring Nirvana's In Utero for our road trip music*. She was firmly turned down, since she's only five, but it was rather stuck in my head!). She lobbied hard for a butterfly-shaped box, but we decided it would be more difficult to ship without getting battered to bits. 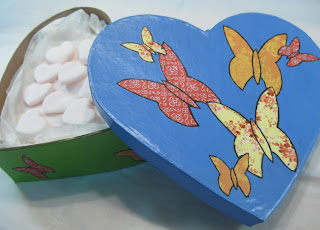 Our hearts came out a bit paler than the ones on Flossie Teacakes, but that's because I was using liquid food colouring and I'm always wary of it, having made some revolting-looking mistakes in the past. We made about five dozen, I think...I'm not sure how many finally made it over to J's (there were four or five layers in the end), but we managed not to scoff too many! It's a really easy recipe and I'd recommend it as one to do with kids; K was able to handle almost all of it without a great deal of help. Oh, and a big thank you to Gail from Gailmade who sent us some perfect heart-shaped cutters - I must blog the lovely Kindle pouch she made for me as part of the Valentine swap. 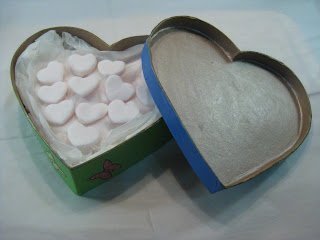 As you can see we used the nice gold paint from the previous box to do the inside. On the outside K painted the top and bottom with poster paint - in retrospect I think I would not do this in future and use acrylic instead, because with the thinned glue over the top it was rather wet and suceptible to scratching until it had a number of layers. Also: damned balding brush - with K painting I got busy with cutting out the smaller butterflies and a load of hairs had dried in before I spotted it. I am most unhappy about this, but with time snapping at our heels we figured it was better to leave it than damage our work trying to pick them all off.

K helped me to decide on the layout of the butterflies on the lid, and as ever I think she did a lovely job. Onwards - she has one of her own to do now ("with spots and spotty butterflies!") and I want to make one for my sister to go with her new bedroom decor.

"Oh, dear, perhaps not that one, love, it's got a few naughty words in that aren't suitable for you yet"

"Ok. Is this one suitable?" (Sting's Ten Summoner's Tales)

"I don't want it, then. THIS is the one for me. It's called Pretty Hate Machine."

Needless to say, Nine Inch Nails did not accompany us to Hobbycraft that afternoon. We finally settled on The Bangles Greatest Hits...
Posted by Caroline at 10:30

At the moment our top car music requests are Linkin Park (from the 4yr old) and Blink 182 (from the 8yr old). When the naughty words come on we call shout "bleep" as loud as we can.