Yes, I know I've missed out Sekrit Project #3. That's because I started it, then the Winnie costume had to be done, then I suddenly realised I MUST start work on #4 because it was for a birthday. And here it is! 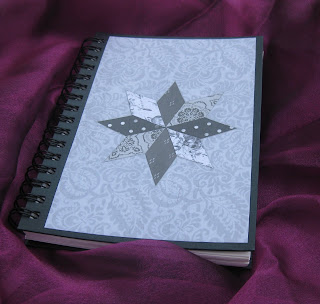 Patchwork Quilt Inspired Decoupaged Notebook
This is a birthday gift for Lou. She and I met many years ago - crumbs, must be 14 or more now - on the Internet, waaaaay before it was cool, via a BBS called Monochrome. We lost touch for various reasons (admittedly mostly my fault as I had a habit of disappearing in a snit when I was younger!) for a long time, and then a mutal friend's wedding turned up the odd fact that we were now living just a couple of towns away from each other, not at opposite ends of the country. Older and wiser, we've rebuilt our friendship - whilst I love my mummy friends dearly and have circles of old uni friends, roleplaying friends, and crafty friends, Lou is one of the few people who seems to overlap in all those areas and more. Her work is similar to what I used to do before having the girls and starting signing, so I really value her for keeping me in touch with the professional, "grown up" world outside of hearth and home - she never makes me feel persona non grata because I don't have a nine-to-five job. Being a stay-at-home or work-from-home mum can be a lonely, sometimes dehumanising business after leaving professional life, even despite my awesome classes. Plus, as human beings go, she's pretty cool ;-)

Anyway, enough gushing and on with the make! I saw Ali at Very Berry's log cabin quilt coin purse some time ago. You know how sometimes you get a little bug in your brain that won't go away til you make something? That purse was a proper itchy bug for me, but I'm terrified of quilting and frankly there's so much crap piled atop my sewing machine I'll be lucky if it doesn't turn into coal sometime soon. I'd been thinking about doing some decoupage for a while and learned it by making Sekrit Projects #1 and #2. Then my brain thought "well, can't you quilt with paper?". Turns out you can - by sewing it together. But I didn't want to do that, I wanted to glue stuff. So I started fiddling about with a log cabin paper patchwork.

Lou is a great writer and recently had a number of articles published in The Guardian and various other places. As I was reading one my eye fell on a Daler-Rowney sketchpad that K had been using. I have a big heap of these and it dawned on me that a writer always needs notebooks, whether to write, jot ideas or simply doodle in. And it's her birthday soon. Notebooks should be pretty. I have black and white...oh yes... monochrome...decoupage papers.

I started a "monochrome" inspiration board on Pinterest, gathering ideas. Lou was posting some interesting typography, so I snaffled some of that too.

Then a new decoupage book

arrived in the post and it actually had a pattern for a star-shaped quilt-inspired book cover. 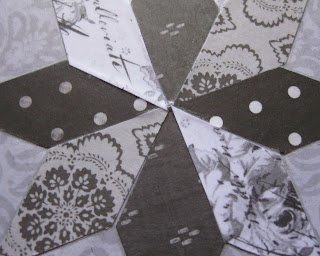 Close-up of the "quilted" star.
These are DoCrafts PaperMania Capsule Collection Papers in Monochrome.
Yeah, you can hear the lego bricks all clicking into place, can't you! I love it when a project comes together like that. I cut out all the pieces for the covers (front and back), and then I went looking for quotes and phrases, as they kept coming up when I searched Pinterest for "black and white". It was so much fun I decided to fill the inside covers and some of the pages at random with funny and inspiring quotes as well as making the outer covers. Here they are: 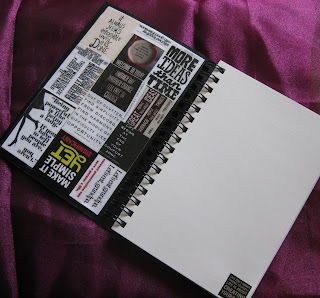 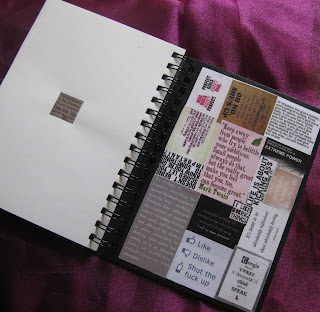 What I learned from this project: it needed more time. Glue and varnish, despite much dampening, really caused the covers to bend and it could have done with at least another overnight's weighting down. And I am yet to get the hang of completely smooth varnishing - I did try sanding but it didn't seem to make much difference; with only two layers of varnish I was a bit nervous of damaging the paper. Perhaps with more layers that will give a better finish - if you can confirm that theory do say so in the comments, I'd be grateful!
Two things remained: a pen (had to be a purple one, and I chose a Pilot Frixion thanks to a recommendation from Flossie Teacakes' blog lately), and some nice wrapping. I've been interested in Furoshiki, the Japanese art of wrapping with cloth rather than paper, for a while and...whaddya know, I recently aquired a book about it. One conveniently purple piece of voile later, here is the finished and wrapped present. Apologies for not such a great pic here - you try taking good snaps when you've a 20lbs baby asleep in a sling on your front! 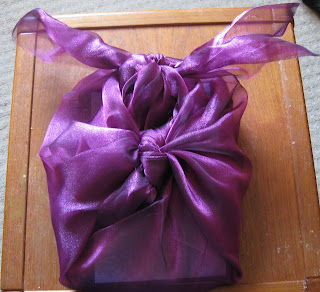 So there we go, that's what I've been up to this week since I finished Winnie. Tonight I think I will reclaim the XBox from A (which he has been hogging since I bought him Halo Reach last week just for being wonderful, cos he is) and get on with Dragon Age 2 for a few nights. Then, Sekrit Project #3 needs sanding/gluing and finishing, and a crochet cardigan for D. It never ends...thank goodness.
Posted by Caroline at 14:44

I love rteading your posts - they are so interesting and full of character.

That is a lovely notebook.

Aww, thank you - that's really cheered me up. I always wonder whether I blather on too much and have been wondering where to take this blog recently. I don't have the time to devote a lot of work to making it more commercialised; providing reviews and networking and all that - great if you can do it but I'm barely managing to make stuff for the family, let alone the shop.

I think it was you that commented on my last post about it being interesting to see the process and what went wrong (lol!), so I think I may go in that sort of direction and see what happens. Cautionary tales for crafters. :D