I can't show you much of my own work at the moment, I'm afraid - between keeping some things hidden for the Cat Swap and Little Bump giving us a worrying time over Easter weekend (we are both fine but it was very scary!), to be honest I've not got a lot done. I'm exceedingly tired and even sitting to crochet is at best uncomfortable and at worst just makes me nod off.

However, I can show you my lovely K in her second brand new dress from ilovebreadandjam.com - an Easter gift from grandparents, and well-deserved as she's put up with a lot over the last few days of my being too shattered to do anything fun with her. She looks more grown-up than ever, I think. Like the previous dress, it's a great fit and washes and wears beautifully. Can't reccommend this shop highly enough!

I also wanted to show off these fab Spring Creatures K made at preschool - aren't they fun? 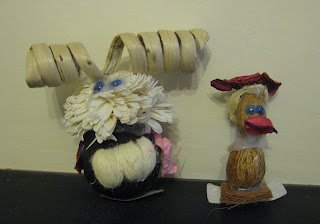 I have no idea what they're "supposed" to be, of course, but she is most insistent that the larger one "definitely has boobs for feeding babies, just like you mum". Apparently these were specially chosen and the creature even has boobs on its back "in case it has lots of babies".


I have got one thing of mine I can show you - apologies for the terrible picture; natural light in our house is hard come by and involves a certain amount of climbing/crawling; at almost 30wks pregnant I'm finding it very hard to reach! This is a stripy jacket for Little Bump in the 12mo size. It's from Crochet in No Time

, of course, and uses Debbie Bliss Baby Cashmerino this time. It's the first time I've used the Baby version - just as nice to work with as the DK but with being thinner, doesn't work up quite as quickly as I'm used to. Still, it's progressing nicely and both K and I are pleased with the colours she chose - it's so nice to work with something that isn't pastel for a small child. 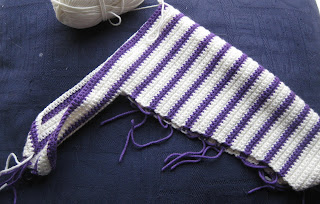 I do like the clever way these cardigans are put together, same as the ballet cardigans I did a while back - the sleeve is crocheted in a flat piece (you can just see the other side of it peeking out from underneath), and then instead of stopping there and having to set the sleeve into the front and back sides, the side is extended down and worked in stripes up and over the shoulder, back and forth until you get the whole of the front side and half of the back done. Repeat on the other side, and all you have to stitch together is the sleeve seams and one seam up the back. Much easier and sturdier, I think.
Posted by Caroline at 15:38

Lovely dress! Your daughter's comments made me giggle soo much - what a sweety!!

It's a BunnyOwl (with boobs)! Gorgeous dress too, the print's lovely.