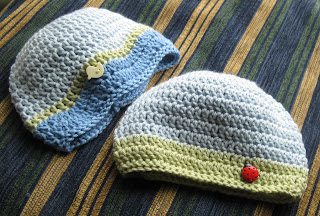 I did it! I got the wave stitch to work with the existing pattern, I'm so pleased. Look at that cute little duck swimming along the river! So obviously I'm keeping that one for Little Bump; the little ladybird hat is for another friend whose baby is due in May (omg, that means ours isn't far behind!). Seems it's a seriously big year for babies; just heard of another two friends due in September.

I do love that little duck! Again, that's from the stash I was sent in the button swap last year. I wish I could share the pattern for the hat with you but I can't work out whether it would be considered too close to the published pattern it's based on. I've changed the colours and dropped the published embellishments, but only two of the rows are a different stitch. There again, there are only so many ways you can form a hat-shape with crochet, aren't there...the pattern of increases is the same for most hats, it's just a matter of how many stitches you start with to get the end circumference. Copying and inspiring is such a minefield, isn't it? Where's the line between look-and-feel and the actual technicalities of a pattern? I think it's beyond me at the moment!

So I've mostly been working on these this week, but I have started the stripy jacket for Little Bump, something for the Cat Swap, and I intend to haul out the Owl In Flight cross stitch shortly as well. Expect some progress pics there in the next few days!
Posted by Caroline at 16:04

They are both beautiful. Glad to see you got the waves to work