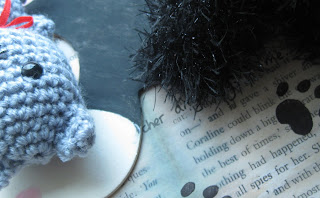 Can you guess what it is yet?

I can't show you anything completed yet! But here are a few of the pieces we've been working on for the Cat Swap - a sneaky peek for you until it's received safely by our partners! There are quite a few bits and pieces which are last-minute makes which will join these, but even seeing these four components together my swap anxiety is lessening - I always worry that it's not enough or not right, but I think we're getting there nicely.

It's been a rather cat-themed time since my last post - one of our moggies had a sudden attack of awful cystitis and spent two days with the vet. Coming so soon on the heels of our scare with Little Bump, and right at the beginning of a new term for me, it's all been very tiring. He is now pretty fine, thankfully, and both cats are adjusting to their new foods and feeding regime.

Poor K has not had much of an Easter holiday - with mummy being exhausted and needing to stay fairly close to home to make sure the cat was recovering well, we've not been out and about much. In fact one of her highlights has been running into some of her preschool friends at Hobbycraft! She's very keen to get back to school now, and I'm looking forward to getting some kind of routine back too. I happened to glance at the pregnancy ticker I use on a parenting forum and was rather shocked to see it saying "about 65 days to go"! That sounds an awful lot closer than "nine weeks" or "two months" or "in June" somehow. I still haven't finished even half of the cardigan I'm working on, but I need to keep reminding myself that she won't actually need it until this time next year (unless she outweighs her 8lbs 3oz older sister by some significant way, that is!).

All in all, it's slow baby steps (if you'll pardon the pun) towards getting things finished, and that's about all I can manage right now.

What a creative whirlwind you are! Quite an inspiration, although threading a needle is about my skill level. Great news about Baby2.