Google tells me the Japanese for Happy Mother's Day is Haha nohi omedeto. I do hope that's right! There will be a lot of people without mothers or children in Japan today and the devastation hasn't gone away: why not drop the price of a coffee or bunch of flowers into the Japanese Red Cross collecting tin? (warning: PayPal page is mostly in Japanese, ofc).


Now that D is 9mo or so, my Maternity Allowance (since I'm self-employed) is coming to an end. I've been fairly austere with it, but with the last I've treated myself to some new craft books, knowing that my earning power for the next 2-4 years is effectively dead and I won't be able to do this for a while. I'm hoping to do some reviews of these books and had idly planned to do so over the coming weeks; as chance would have it some of them arrived whilst my mum was here on Wednesday. Mum's always been a big crafting influence on me, though we don't have many crafts in common - she is a cake decorator extraordinaire, has no fear of the sewing machine and can knit, omg, none of which I'm any good at (yet. I live in hope). But together we nosied through them and the one which caught both our attention was:

Kyuuto! Japanese Crafts: Lacy Crochet. It mostly caught my attention because, damn, it looks intimidating at first! Not because the projects are particularly difficult, but because you will have to learn to love working from diagrams if you want to make anything. And actually, it's not that hard once you uncross your eyes (perhaps that's just me, I'm still struggling to adjust to new glasses this week!), get familiar with the notation and have a little practice.

What I have found frustrating is something that bugs me about most crochet books from overseas: yarn description. All through this book it's simply referred to as "lace thread". What? That could be anything - it's simply noted in "x grams" and suggests a hook which is 1.75 or 1.8mm. I don't own hooks of that size (can you even buy them in the UK?). Other than that, the instructions are fairly clear. I'm not keen on the layout, I must admit - I prefer to see the photograph of the finished project next to the instructions, not to have to flip through the book. This is an argument I have with a number of books and is by no means unique to this one, though.

I have in my stash a heap of varigated Anchor threads which purport to be a size "8" - again, no idea what that means, really, only that they're finer than Anchor Perle 5 but not as light as six-strand embroidery thread. It's been a bit of a slapdash week so I just grabbed one of my steel hooks that looked vaguely right - a UK old 13, I think, so probably less than 2mm but I'm not sure what - and dove straight into the rose corsage project which Mum rather liked. She chose pinks and blacks, which have come up quite well, I think. I substituted 4mm faceted beads in place of the 5mm wooden ones recommended.

It's certainly fiddly to work at this level, but once you get the knack it's pretty quick. I honestly don't think any of the projects in this book are particularly hard once you've cracked the diagram reading, though they probably won't appeal to everyone. There are rather a lot of doilies - but getting the technique for this kind of work can lead to all sorts of inspirations, I think. 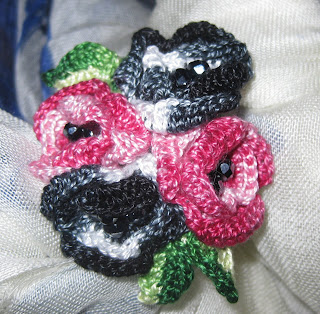 What I learnt from this project: That I'm better than I think I am and that having good stash is both excellent and crucial to off-the-cuff projects (I had brooch pins and beads in already, see). That diagrams definitely have a place for fiddly projects like this, and that they're not that hard to read.


I mentioned last week that Furoshiki: The Art of Gift-wrapping With Fabric

is now resident on my shelf: here is another example using a lovely butterfly-printed scarf (from Oasis, if you were wondering), tied around a long box of choccies and a framed pic of my awesome girls. Despite being rated three Sumo wrestlers for difficulty, it wasn't actually very difficult - the instructions and diagrams are very clear. I'd recommend it! 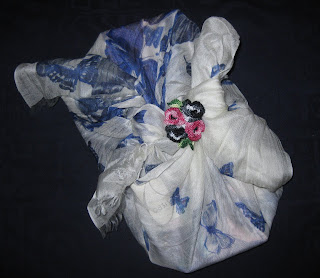 So we're accidentally Japanese-styled this Mother's Day. Well, my gift to my mum is, anyway...K has made me no less than three cards plus one for her dad; a fluffy guinea pig made of card and fun-fur; purchased two fairy cakes from the school stall (one of which she claimed herself, which is better than her friend who apparently ate both!); and a teeny-tiny pot of perfect narcissi. Lovely!
Posted by Caroline at 14:00