A Tale Of Two Pens

Oh dear, it's been rather a while, hasn't it. The Easter hols were pretty busy and broken-up with various days off school and so our family rhythm was almost completely shot (the arrival of Dragon Age 2 has nothing to do with my lack of crafting, honestly). In a desperate attempt to tidy my craft corner I made myself finish a crochet jacket for D - more of that in another post because I haven't actually blocked and photographed it yet; it's at least a size too big, thankfully. I should really be working on a crochet top for K, and a further top each for both girls, but I've become completely side-tracked by drawing. I've been mucking about with Zentangles for a bit and recently bought The Mandala Book

, which K and I have really enjoyed looking at.


My dear baby sister is starting to plan her weddings (her partner is Hindi so they're having both a Western-style and a temple wedding, how cool is that - I get to have two awesome outfits!) - which won't happen for a few years yet, but when did that ever stop people daydreaming? :) And by people, I mean me, hehe. A few weekends ago I picked up a copy of Making magazine, which was the "paper" edition - the front has a glorious papercut on it, a craft I've wanted to try for a while. After some fiddling around with paper and a craft knife when I should have been crocheting, I decided I needed new knives and to that end a parcel from Fred Aldous arrived yesterday (I love Fred's. I've haunted it off and on since I was a student and no matter how they revamp it, it'll always represent magic to me. Also their mail order service is truly awesome).


In the meantime A has been working on illustrations for a story he wrote for K, and I've been thinking about drawing some inspiration from mendhi henna patterns to convert to papercuts. Thusday night we were sitting on the couch together, sketchbooks on laps, whinging about our drawing pens. I have a Pilot Drawing Pen, and he has a Faber-Castell Pitt Brush Pen. Being artists of very little experience, we'd just picked them because we liked them, but they were totally unsuitable for what we were doing. So we swapped - and voila, his illustrations rapidly improved and I actually had the courage to draw something. Drawing has eluded me since I was in school - the fear of getting it wrong and pissing off the old dragon of a teacher has been incredibly strong even though I ditched art at 13. I'd done some searching about for mendhi patterns earlier on in the day, so I put pen to paper and this is what came out. 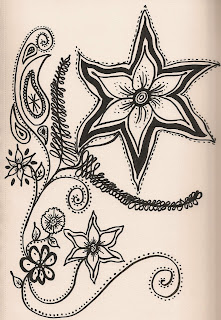 Just having a go at various techniques - I need to practice my ffffs! 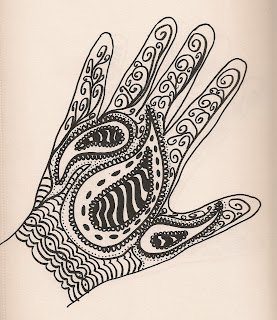 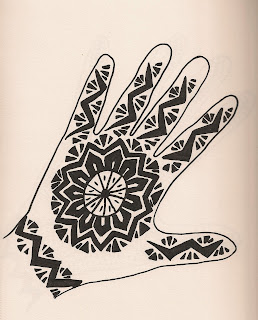 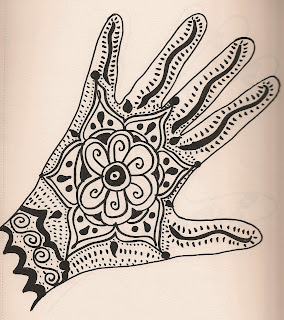 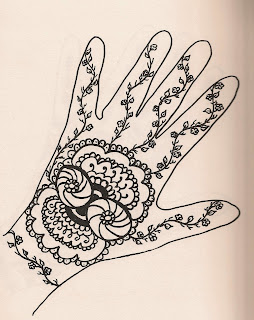 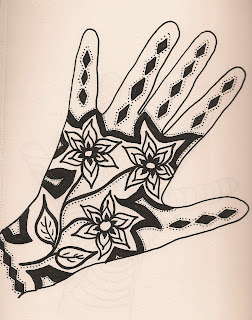 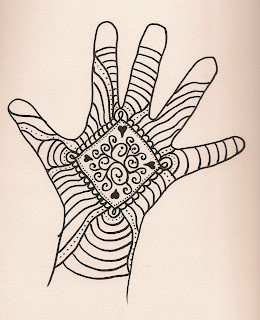 A little hand for K - she specifically asked for spirals

What I've learnt so far:

- the right pen can make a lot of difference to my confidence.
- mucking about is a good way to learn (doh - I've always said this for everything else but the ghost of my art teacher wouldn't let me play with drawing!).
- I need to learn a lot more about mendhi patterns and techniques but I think some of the nuts and bolts are in place already.

I am just messing about with these at the moment and no doubt a true mendhi artist would be chuckling about my amateurism, but hey, everyone's got to start somewhere.
Posted by Caroline at 16:12

Those are really beautiful!