I've been cackling all week on Twitter about having a couple of secret (quite why I keep writing it "sekrit" I don't know but it amuses me for no good reason) projects on the go, and now that I know #1 has been safely received I can reveal it and tell you all about our exciting experiments with decoupage. Ok, maybe not that exciting if you've done it before but it's something I've always wanted to have a go at and this presented the perfect opportunity. 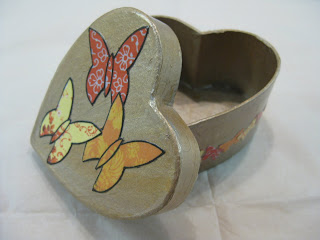 The project (#2) which set off the inspiration train is still in transit, so I can't tell you why I picked this particular shaped box as yet, but project #1 was meant to be a sort of trial piece to see if I could get the technique right. It worked ridiculously well, and as I left it to dry next to me, I turned to look at Twitter and saw a friend of ours was in hospital fighting a nasty infection. I loathe hospitals almost to the point of terror and can't help but feel for anyone stuck in one, so a speedy conflab with K (who was going to have the original piece and is now getting a larger box to work on by herself) and our friend's partner meant I could quickly reassign the piece to her. 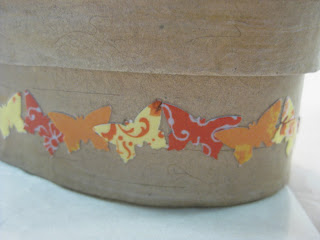 So yes, butterflies again. The cardboard heart box came from Hobbycraft, picked up when we went for the Spring Ring supplies; as did the papers which are the Sunshine Capsule Collection from DoCrafts. Of course, this being me and my luck, the papers seem to be the end of the range, so whilst I got them cheaply I'm now struggling to pick up other packs in different shades (thank goodness for eBay). They're really pretty though, and since I'd got A4 I was able to plop them straight in the printer and use our template from the Spring Ring project. K chose the patterns and then joyfully cut them out whilst I used a punch for the much smaller ones round the side. I do think K has a good eye for colour - I'm often dubious when she initially picks things out but somehow they always come togther well. 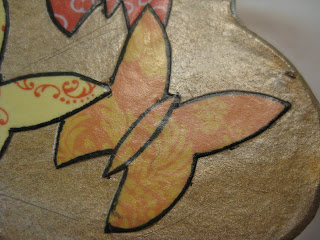 The box itself is painted sort-of gold - I say sort-of because I used this very odd paint I picked up ages ago from Unique Scrapstore (which, upsettingly, seems to be no longer operative - anyone in Newark know what's happening?). The paint is a gloopy PVA-ish mixture of gold, copper and silver which goes on in streaks and whirls of shade. The pictures here really don't do it justice and I'm not a good enough photographer to capture it, sadly.

Mistakes I made with this project:
However, I think it's come out pretty nicely! All that remained was to fill it with something delicious and wicked, so we chose these awesome chocolate truffles which are so easy and so evil that they're one of my gift standards now. And they don't contain cream, so they travel well. Though I wouldn't post them as far as Cambridge in summer time, that's for sure!

Hopefully project #2 will arrive shortly and I'll be able to show off that one too. In the meantime, I'll try and find another baby naptime to blog about the squares I made for the 100 Million Stitches project (look, there's my name on the Wall of Fame!). And my evenings...? Well, they're now taken up with a desperate effort to get a precisely-detailed Winnie The Witch costume together for K's school event combining World Book Day with Comic Relief. Work on the dress is going great guns!
Posted by Caroline at 09:15

Fabulous Post!
thanks for sharing - i really like the buterflies and it looks wonderfully made. very impressive for a first try.

Really interesting post. It is always great to see the process and what you have leanrt.

I love the boxes.