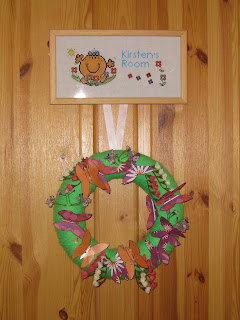 K looooooves butterflies. She's not an especially girly-girl - we seem to have skipped the pink princesses phase so far (there's still time, I'm under no illusions!) - but butterflies are The Biz as far as she's concerned.

On her bedroom door she's had some big butterflies we made through mirror-image printing (you know, where you paint half the picture and fold it over), but they've been up there since she was about two and they were looking really tired and scruffy. So when I saw this project in Popular Crafts on Sunday we barely paused for breath before leaping into the car to get the equipment.

This is SUCH a simple project - wrap yarn round a polystyrene ring and pin on some paper butterflies - and a joy to do with her. She chose the rather fluorescent green herself, of course, and picked out some silk flowers to be woven in too (I recommend doing this bit after you've wrapped the whole ring first as it's easy to knock them out otherwise). We didn't get a butterfly punch, as recommended in the magazine; we just Googled for a good template and printed it out onto patterned and pearlised paper (all of which we'd aquired for free, so total cost was under £4!). K's pretty nifty with the scissors so she cut them all out herself and pinned them on, too. I'd probably use fewer myself, but it's absolutely bursting with five-year-old's exuberance...I love it.

It really breathes life into the rather dark stairwell at the top of our stairs, and it's inspired several other sekrit projects which are now on the boil. Hurray! 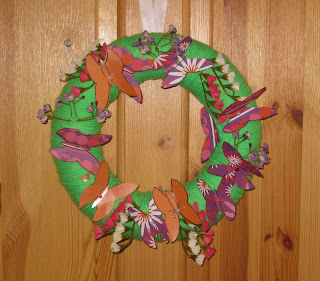 That is beautiful. And how lovely to do it together.

that is so sweet! I love butterflies, too!

Really appreciate the magazine mention ;) Thanks Caroline! Working on a kids craft issue for June you may be interested to hear...

Aww, thanks everyone. She's been taking all our visitors up the stairs just to see it!

Kerry> Glad to hear it - just in time for the Summer hols! This project really kicked our half-term off nicely because it was such a "quick win" - since it took one day including getting the materials, it was easy to do on a day between two lots of friends coming.

It set off a few ideas, too - more butterflies to come once they've found their new homes. :)