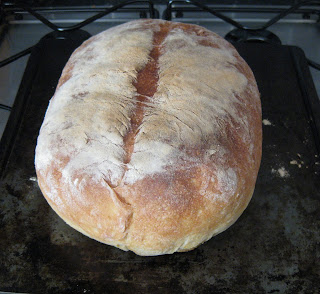 I wanted to have a picture of racks and racks of gleaming jam this week, but you'll have to make do with my first proper loaf instead! I used this recipe because I've always been terrifed of bread. I've tried a number of times before and been utterly flummoxed by rye and sourdough - most of my loaves have resembled bricks and not tasted much better. This, however, looks practically perfect. It's literally just out of the oven so we haven't tasted it yet, but I also made soda bread from this recipe earlier. That was delicious - and I use the word "was" because it's already disappeared within an hour of K coming home from preschool; first as a bread-and-jam sample and then with Cosy Soup (spicy butternut squash).

Jam-wise I made rhubarb jam and tricolore marmalade on Sunday - if you follow me on Twitter you'll know I had a crisis because the fresh rhubarb from my FIL's allotment vanished from the kitchen for three days! We found it eventually hanging on the back of the door where someone had put it absent-mindedly on our return from Newcastle. Whoops. Anyway, it's made the most beautiful, sharp, tangy jam which is just perfect on toast. I used a Mrs Beeton recipe for that one.

The tricolore marmalade is a mishmash of Mrs B's recipes and techniques made to my own taste, so I can share it:

Tricolore Marmalade
1 ruby grapefruit
2 small oranges
1 lemon
an equal weight of pectin-added sugar
200ml water
Remove the flesh from the peels and break into small pieces, taking out pips and all those icky bits. Now boil the peels for two hours, changing the water at least twice. When done, cut the peels up fine and place into a pan, adding the flesh and the sugar and about 200ml water. Now boil this for about half an hour or until a drop sets on a cold plate. Plonk into sterilised jars. To one of my jars I added a tbsp of whisky - looking forward to seeing how that comes out!

Speaking of alcohol I've been making blackberry vodka this week, too - I'd love to say I went brambling (as K did with her grandma and great gran, bringing home the jam to prove it) and have returned with the glory of autumn scratched up my arms, but sadly not. I spotted a load of punnets going cheap in the supermarket and, well, blackberry vodka is the result. I got the recipe from a friend who says it's from a River Cottage book. I now have to leave it until December, but I can say already that it tastes pretty good! Another friend suggested reserving the fruit once drained and coating it in dark chocolate. I can't wait to try it!

We're waiting around for our veg box to arrive today - again, there's a surplus of plums going cheap so when it arrives I'll be making plum jam. Whilst I've been waiting and baking I've taken two other deliveries: 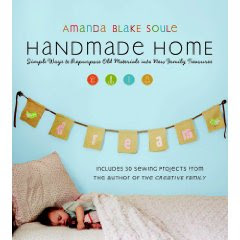 finally arrived, hurray! I've had this on preorder since Feburary and was most miffed when it was delayed a few weeks ago. I'm really looking forward to snuggling down with this (though not tonight - wild horses couldn't keep me away from Derren Brown's Events!). And Guitar Hero 5 has also arrived; strictly speaking A's birthday present but I'm looking forward to having a go on that before too long.

That said, I have been struggling with RSI recently - hence all the baking, reading and making rather than crocheting. Through the rest of the week I've also made a seat cushion, and used the granny squares I got from Sam at Incy Wincy Stitches on a personal project (will show you next week when it's finished!), made yet more crochet cake components (almost there) and started work on one of the pieces for the 80's Fantasy Move Craft Swap, with three more things planned out in my head. Oh yeah, and term starts on Saturday so I've been buried under paperwork for much of the week too!


Next week I promise to blog about the beautiful necklaces I received recently from Steam Punk Glass and Epheriell Designs - I've wanted to do this for at least a week but haven't been able to sit and do them justice - and hopefully review Note to Self: On Keeping a Journal and Other Dangerous Pursuits

, which I'm reading for Woolly Wotnots' Bookclub at the moment. Until then I'm going to stuff myself with bread and jam, coo over all the lovely new babies starting class this term, listen to K reading (she's so close to being fluent now!) and, you know, just keep everything ticking over in the last of the sunshine...have a lovely weekend!
Posted by Caroline at 13:43

Hi Caroline. I saw you over on the Woollywotnot's book club forum and wanted to stop by and say hello. I've enjoyed reading your blog. You have such a variety of interests-- I'm like that, too. Are you enjoying Note to Self? I may check it out.

Thanks for dropping by :) So glad you like my random little corner of gibberish. I like "variety of interests", what a nice way to put it (instead of "jack of all trades, master of none", which is how I usually think of it!). Yes, I've enjoyed Note To Self - hopefully I'll get chance to review it later this week.