What are you doing this afternoon? This weekend? Stop whatever you're doing for half an hour and destash. That's all it takes to get involved with this absolutely brilliant project. Face it, if you're a crafter you've got too much stuff. It's true of us all, whether you live your crafting life out of ugly plastic boxes like me, or have a full-on studio and all points in between. You know you've a yard of cotton or a handful of fat quarters doing nowt, that never fit into any project you can think of. I'm plenty sure you've a boxful of buttons, maybe some beads or sequins, an extra pair of scissors or some knitting needles you'll never use. Oh, and those spare balls of yarn that don't match anything, and short ends of ribbon? Grab them too, because whilst you don't really need them, there are plenty of women who do.

Iraqi Bundles of Love (yes, I know it's a little cheesy but bear with it) was set up by a serving soldier with the US Army in Northern Iraq. I found the link via SouleMama. He's from a family of quilters and clearly his mum (and his wife, natch) brought him up right because he knows crafters are generous people. Aren't we just? And that when we hear of fellow crafters not even having enough material to make their own clothes and keep themselves warm, we can't help but spring into action.

Here's the story from the horse's mouth, but briefly:

Iraqi Bundles of Love is a short-duration project, set to last about six weeks, originally intended to surge fabric and sewing (and knitting!) materials into the area around which I live in Iraq. It is timed to coincide with both Ramadan, and the departure of my units from Iraq. If you’re reading this, well — it’s kind of grown. It’s going to help a little bit more of northern Iraq than just the area around where I live.

The stated intent of this operation is to put sewing and quilting and knitting supplies into the hands of two types of recipients: locals who desperately need such things, and local sewing co-ops and other small businesses who have received grants or loans (typically to purchase sewing machines, rent space, etc).

Got it? So you're already thinking about what you don't need, aren't you? Start digging. Here's the sort of stash needed and here's how to put it together. Rope your kids in, if you've got 'em, your cat if not. Or both. 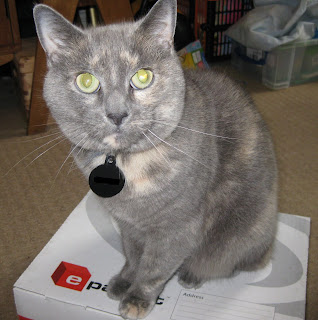 Now, if you're in the US (hello!), the mailing methods are within the last link; you'll be sending by APO and it'll cost you about $12 or so. Easy peasy. Hop to it - leave a comment on the IBOL blog anywhere to get the address. You need to get your parcel in the post by Tuesday. If you're in the UK or indeed anywhere in the EU, just find yourself a box that's roughly 12x12x5.5ins - ours was a bit longer and flatter, but you're looking to get somewhere between 1-2kg of stuff in there, ideally. Wing it - no excuses. Then leave a comment on the IBOL blog, making sure you write where you live, and you'll be emailed back with an address in the Nederlands (sadly there's no UK address) who will forward it on to Iraq for you. Now off you go to the post office. I sent ours by airmail, it was 1.9kg and cost me just over £10; obviously it'll vary depending on what you put in it - I included some heavy upholstery fabric so that did push it up a bit. 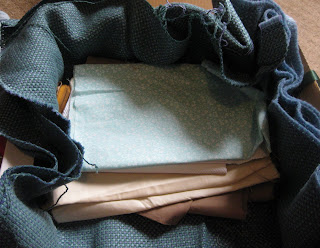 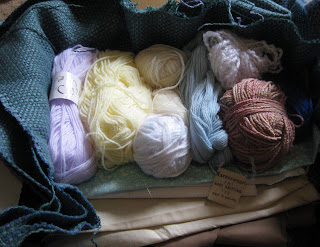 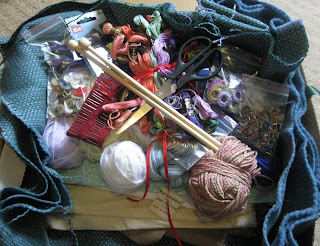 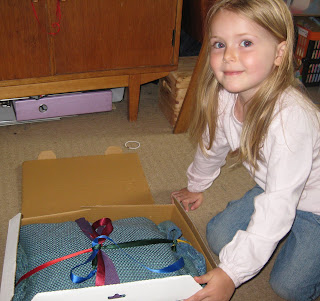 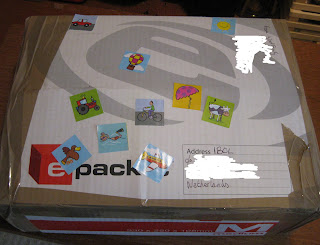 Optional going to town on decorating the parcel
Why do it? Because we, collectively, have made a right bloody mess of Iraq for years and years, first of all. Because it SUCKS not to have enough to even make your own clothes or blankets for your kids. Because this is something we can do, right here, right now, which will make a difference. Because winter's coming. Because it's practical - this is not your salary falling into a bottomless pit of charity donations, when you're never sure if your hard-earned pennies are going on office pencils or school textbooks. Because it's EASY.

This is sharing love - human to human, crafter to crafter, woman to woman, mother to mother, child to child. This is human. So get on with it. You've got a day or two before the deadline and it only takes half an hour, if that.