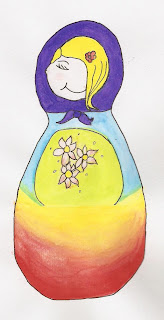 I'm rather proud of this! This is my first watercolor painting ever - cheap paints and brushes off a not-very-cheap magazine, and sort of copying an example from within. I learnt quite a lot here and am feeling quite inspired to have another go when I get a quiet moment (er, when's that then?!). I feel like I might be able to have a go at silk painting this year, something I've always wanted to do but not had the drawing/painting confidence to have a try.

In crochet news the January cake commissions are completed; I had intended to get more shop stock made but now I have some more patterns to work out. I'd always intended to make some larger cakes for my own classes and serendipity being what it is meant that this was mentioned rather earlier than I'd expected. Several other prop ideas were mentioned and now I'm trying to get my head around clouds and suns as well! I've found some lovely patterns which I've been having a go at just to get an idea of shapes, but I need much bigger toys than what I've been able to find so far, so still lots of work needing to be done. That's about it for now!
Posted by Caroline at 20:29