Bringing in the green 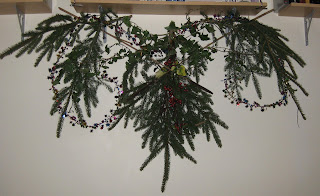 I always put plenty of greenery up in my house at Christmas and forget to photograph it - it's generally scavenged off-cuts from trees and ever-more expensive holly. This year our usual tree supplier is not trading so we went to another (we hire a living tree in a pot rather than a cut one, and since we've no garden or indoor space it solves all sorts of problems of storage). Unfortunately they rather screwed up the delivery, so we received our greens for free this year - the ultimate in credit crunch chic, I guess! To the left is the main display in the living room, always a rather precarious thing strung between the bookshelves. The starry tinsel was chosen by K when she was just 13mo - through signing her preference, naturally. Interesting bulrushes in the mix this year, all looks rather heraldic to me. 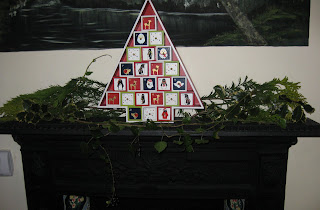 Here's the mantelpiece with the advent tree, which K not only filled herself but is decanting each morning; golden coins and snowmen and Christmas pudding chocolates along with her breakfast. Quite how she's going to react to there being no little drawer to open on Christmas Day I'm not sure. Just holly, ivy and cupresser here and a few of my little beaded snowflakes, which you can't see clearly because of the duff lighting. I must do a tutorial for those at some point. 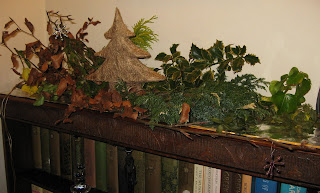 A little forest scene for the top of the bookshelves. I was a little surprised at the inclusion of a big branch of dried birch, but I think it works quite well as the base for this one. The little tree does light up but requires a longer cord at the moment. Again, some more of my beaded snowflakes on here which you can just see one of in the top left corner. They're dead handy for using up small amounts of beads if you have some very thin wire around; this is their third year in service. Usually they grace a front-door wreath but I haven't got round to making one of those this year. I refer you instead to my esteemed friend Creative Mother for her Festive Door Knocker. 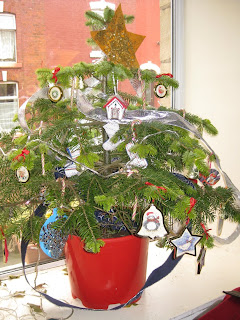 Our tree is...well. Three-year-old K is taller than it, but we made the best of the situation and it's as home-made as ever - all of the decorations have been hand-stitched by me over the last few years. What with the shop and all I've not had chance to make any this year, but as luck would have it, K made a wonderful pasta and glitter star at preschool which is just what we needed for the top. And a glittery bauble, too. The most important thing of course is the inclusion of plenty of candy canes!

Amongst all of this green frippery I've been working hard on a new hat for K - all the while I've been making stuff for the shop from acrylic I've been dying to get my hands on some more cashmerino as it's such a delight to work with. So I took the proceeds and bought as much as I needed to make a chocolate brown pull-on hat and a pale blue Sugar Plum Fairy cardigan I've been promising K for months (although she will have to wait a while longer yet). The hat is done and completed with an icy blue rose; she was keen to have a scarf so I'm now working on that in chocolate and blue waves. Quite whether two not-quite-full balls will make the right length remains to be seen. I must also finish the necromancer; today is slated for making ginger biscuits and I'm wondering if I can sneak in a Five Minute Angry Chicken Skirt, since K is keen to "play reading" on the PC later and that's guaranteed sewing time for me...
Posted by Caroline at 11:03