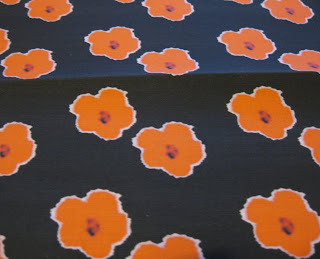 A strange coincidence that this should arrive today. I tend to go for white poppies if I'm going to wear them at all (and I am not going to get into a debate about this, so don't bother - neither the time nor the place). I just happen to like poppies as a flower and they're easy to draw with a mouse. Maybe I should have had more white background on this!

Recently I had a go at designing some fabric via Spoonflower - a half-arsed attempt in the middle of the night, to be sure, but an attempt nevertheless. And it's here! Just a wee swatch, enough to tell me I need a lot more practice with The Gimp but it's quite hopeful. It's not bad at all, actually - perhaps a little thinner than I was expecting, it must be said, but I don't know much about fabric thicknesses so that's probably my misconception. It's about the same as some of the fat quarters I regularly work with so would be fine to order by the metre once I get a decent pattern going. The depth of colour is not quite what I'd wanted (I wanted a proper scarlet and it's a bit orange-y); again I think that's a fault of mine in not knowing enough about the graphics side of things. Given that the pattern was knocked up in 20mins flat at 2am I think it's not bad at all!

Spent last night cutting out fabric for the Out & About Books, and still have cake orders flooding in...guess I'm not going to get chance to have another play until well after Christmas. Ah well!
Posted by Caroline at 11:59

It's pretty good for a 1st go I think! Are you sick of crocheting all those cakes yet?? I am completely done with elephants...

It's not bad, is it? I might have another go with a similar shape on navy blue when I have a few minutes.

Don't mention cakes. I have 90 still to do before xmas - every time I get a set done another order comes in! It's great but..OMG. :)

I loved your Elly! H looked really chuffed with it. Have you done loads?

Only 3 but that's enough for me! I struggle with getting an expression on their faces that isn't a bit mad..