So, first project to be captured on the new camera is Reggie - an amigurumi spider which came entirely out of K's head for her beloved Auntie K's birthday last week. Quite why she thought a spider was an appropriate gift I have no idea - I blame Charlie & Lola - but this she invented from scratch. She was very clear last Friday that she wanted to make something, and it had to be a spider. Being fresh from rather a lot of amigurumi myself, I suggested I could crochet it like her aliens, and she loved this idea - I think perhaps because it afforded her a rummage through the yarn boxes! She picked out this blue Sirdar Zanzibar, and then spotting my copy of Creepy Cute Crochet

, decided that it must have a little top hat like the Day Of The Dead Guy as well. I started there and then, and with a quick dash to Hobbycraft to pick up some white Zanzibar for the hanging thread, all was complete in time for Auntie K's birthday lunch on the Sunday. Whereupon she named him "Reggie". Again, no idea why but you have to admire her ideas! 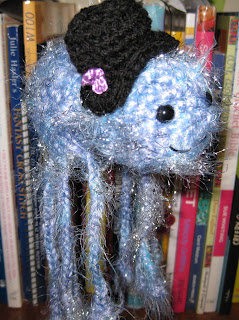 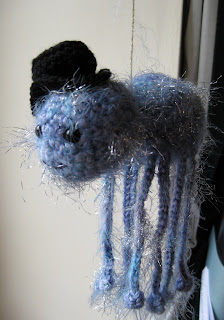 And here she is with her own work of art pudding - her face absolutely lit up when it arrived and other diners got quite a giggle at her reaction! 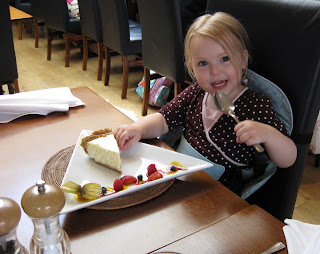 Due to some horrible roadworks I found myself with an hour to kill after class on Wednesday - no point in coming home and too early to pick up A from work. So I wandered into Bury to have a nosy at their art gallery, somewhere I haven't been before but have been receiving flyers from for a while now. Sadly I was a little too early for the exhibition I wanted to see (The Irony of Flatness), but perhaps another time. It's like most "small town" art galleries, I guess, saturated with Victoriana and a few local artists, though this one seems to be rather better curated with many changing exhibitions. I particularly liked the "Woman In A White Dress" portrait for the wonderful texture of the dress and also Ludwig Deutche's "Moor At Prayer" - just amazing colours, the link here doesn't do it justice.

I was irritated at the Adult Learner's course display. Not because their work was poor - on the contrary - but because I know I can do as well myself and I'm rather jealous of people who have the time/money to go on a course and have a tutor! Although I am still working on "art" vs "craft"...I must admit I do spend a fair bit of time in art galleries looking and thinking "well, what's the point - wouldn't it be better to make something functional as well as beautiful?". I guess I am a bit too practical for "art".

On a side note I really must put a notebook in my bag, I'm fed up with forgetting artist names. The NICE Paintings website I've just discovered is a rather good resource, though!

I was also horrifed at the display of a pair of "golden lotus" shoes, traditionally worn by foot-bound Chinese women. I've read about them, of course, but I think it's only when you see these things up close that it really hits you just how small they are. I can't even begin to imagine how much pain millions of women went through. Having just got new shoes for K - a size 7 at 2 & 3/4 years old - these really weren't much bigger.


Finally, I am actually working on things still - the Starghan featured in the previous post is now on the 26th round and taking entire evenings to do single rounds on. It measures around 3ft now and is my penance for not checking the exact type of yarn before buying it - it should have been DK for another project and is 4ply, so it's working up very fine. I still have another two balls of each colour so this is going to go on and on and on until it uses up all the wool.

I have been rather naughty/fortunate in that I've been scouting eBay via the automatic search for months to find some Sirdar Yoyo at a reasonable price. I need two balls of the same dyelot to make a long blanket-cardigan for myself, but at £14.99 a ball new, it wasn't going to happen (although that said, to buy a cardigan in this style in the shops would probably set you back £50 so it's still a bargain). Last night I finally managed to pick up two balls for just £12, which has to be some kind of record for me. It's rather pink-y - not a colour I'd normally choose for myself - but I'm feeling kinda random at the moment and it was too good a bargain to pass up.

I'm still working on a top for K but the tension is well out of whack as I'm using different yarn - I think I'm going to need to modify the pattern significantly to make it long enough for the width. Shouldn't be a problem as it's just repeated (and could easily be lengthened with some kind of trim), but I do need to find one of the tops I've got stashed away for her in a size 5-6 and measure it up!

Finally I am working on some prototypes...I'm keen to get an Etsy shop off the ground this year. I know what I'd like to do but seriously...every username under the sun is taken! In the meantime I will leave you with the lovely Ali's shop CraftMatters1970 - she's got some great bags in, snap them up while you can!
Posted by Caroline at 11:54

The Irony of Victoriana: It is a shame that you didnt visit at the right time, you would have found that it is not saturated with Victoriana but the most important contemporary programme in the North of England.

Well, perhaps you could say a bit more rather than leaving a somewhat snarky anonymous comment? What makes it so important (in your opinion, which I must point out may not be mine!)? Really the *whole* North of England? More so than say, the Tate or the Baltic?

There truly *was* a lot of Victorian stuff there, as there is in most small town art galleries - lots of bequests made at that time, of course. Of course it needs to be shown as there are a lot of wonderful things - as I did indeed point out. But I fail to see how what was displayed a few weeks ago is the MOST important programme. Perhaps the newer displays are more interesting - I would like to hear more. Don't leave it hanging like that as it does nothing for your cause.