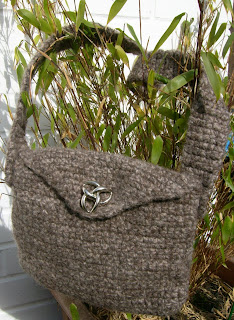 There, a little later than promised but here it is. Quite pleased with that!

I've finished another project since that but I cannot reveal it as yet...it's a gift so I don't want to post a pic until I know it's been received. I'm now half-way through a little hat for K from some of the pale green cashmerino...I really want to put a daffodil on it but we'll see whether it'll defeat me again. I've had some real problems swapping from chunky yarn to something finer - anything less than a 4mm hook seems like very hard work!

I think the hook-itch may be starting to fade. Or possibly I'm just feeling extra-tired...I've been catching up with old friends (and making new ones, which is just lovely!) a lot online over the last couple of weeks and I think the extra typing plus lots of fast crochet, plus the new signing term starting is beginning to take a toll on my wrists. Bit of a bummer as I don't (and can't!) give up any of those things, so it's out with the topical ibuprofen again and maybe switch projects for a bit once K's hat is finished. And perhaps not spend quite so much time playing stupid games on Facebook...!
Posted by Caroline at 11:56