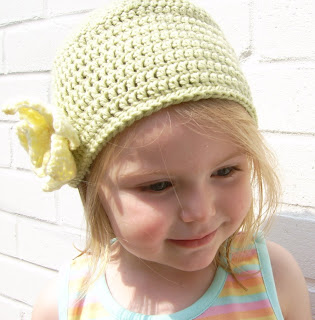 Pretty girl...
A little late for the season, this one, given the mini-heatwave we're having! But a quick cashmerino DK crochet hat with a daffodil (in Sirdar Snuggly, since that's all I had in in yellow) on it for K. The daffodil pattern was from Crochet-Me via Craftster originally, but unfortunately it worked up far too big for this little hat so I had to write a new pattern to half-size it (I also had to make a British translation of the original pattern before I could start!). 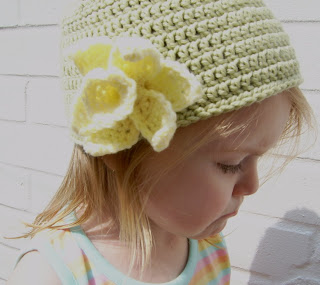 Contrast fiddled with on this one to show the detail -
not a lot of options for taking pics at our house!

I'm not entirely convinced it's the right size and eventually I'm going to have a go at some even smaller narcissi (I had originally envisioned a small cluster rather than one big flower), but it does the job, considering it won't get much wear for a few months now! I'm about half-way through making another in the same colour for our friends' little girl in New Zealand, since the weather is now turning colder there. But daffs are no good for an autumn hat...I'm scrounging around for flower ideas for something more seasonal. 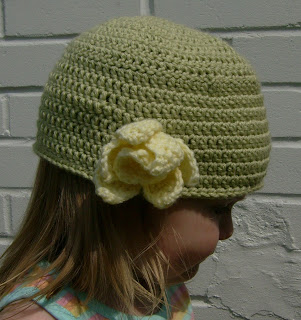 You can see why I'm not sure about the wool on the daff,
it's curling up a bit. But I haven't pressed it yet!

arrived, which was rather nice to come back to after two busy classes and a hot and sticky search for play sand. A was kind enough to pick up five balls of multicoloured twine for me on his weekly pilgrimage to B&Q, so I'm looking forward to having a practice at that. But there's still a hat, a pair of bootees, a shrug for me and potentially a wrap cardigan for K to do yet...taking all bets now on whether I get bitten by the new craft bug or whether the hooking will keep me interested long enough to rattle through these projects...
Posted by Caroline at 13:26