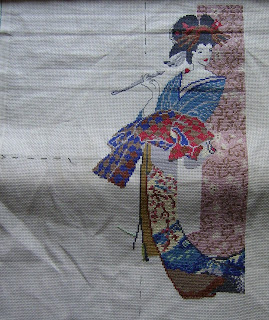 I've been stitching at Geisha now for aaaaaages and to be quite honest I'm getting bored with it. I've done a lot of nit-picky details recently and it's all at the bottom of the picture, which makes my hands and wrists really ache. I wanted to finish this bottom quarter by now, but there's still quite a lot to do. I'm also tired of the colours - I'd forgotten that they're all rather muted and dull, which is a bit strange (it's not just the photo, they really are that boring). I think I am going to take a break and do something else shortly; my supply of stubornness (I WILL finish it) is running out drastically right now. For reference, by the way, the design area is well over a foot long. It has come on well, though, so I think I'd be justified in putting it down for a bit and leaving it alone.

What to do next, though? I think I would like a complete change for a bit; the weather's getting more and more unbearable and I have a sewing machine I still haven't unpacked, a large piece of lovely cool printed cotton and the idea to make a very very simple wrap-around skirt. I'm not very good with machine sewing, though; the hem could well end up out of shape. Still, it's a learning curve, and let's face it, that material's been hanging around so long I may as well get on with it, or give up and chuck it in the charity bag! I am very tempted to get hold of a copy of Yeah, I Made It Myself: DIY Fashion for the Not Very Domestic Goddess

before I start, though. I feel a bit of a doofus when it comes to dressmaking, having made only one thing before which didn't go exactly according to plan. It was wearable (in fact, I wore it to a wedding) but I definitely got the armpits and neckline wrong!

In other news himself and I are working on a joint project for K's room - a set of picture-book shelves, the flat ones you get in school libraries where the books are displayed with the covers outwards rather than the spines. A has built the shelves from MDF after much swearing and chopping and banging, and I've put two coats of white primer on - MDF doesn't half suck up paint on the cut edges, sheesh. The next job is to paint it lime green (it's not as violent as it sounds!) to match her bedding and curtains, and then stencil up the sides with daisies. I may even do the inside back, it depends how it looks. K chose the daisies herself and we managed to get the stencils and paints really cheap in B&Q.
Posted by Caroline at 12:55