My Big Fat Work In Progress 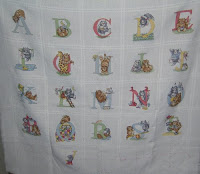 Here is a picture of probably my biggest "work in progress" (or WIP, as they're known)...to be honest, it should probably be referred to as a UFO (unfinished object) now as I haven't picked it up in ages.

I started stitching this alphabet Afghan the day I found out I was pregnant (Mother's Day 2005), and stitched right the way through the pregnancy - it really took the edge off those boring last few weeks at home when I was just too darn big and sore to move. I think I'd got to about the Q or R when I went into labour. It was also a big help when we had to go back into hospital with K. It was good to be working on something she would use one day rather than dwelling on the fact that she was stuck in an incubator and might not make it home again.

I remember stitching the S on the children's ward and being complimented by the nurses (who most likely then walked out of the room shaking their heads at the crazy woman). Since then I've done very little - I always mean to go back to it once I've finished this time-sensitive project or that gift for someone, and I've had a lot of those this year (next post, I think). Plus you can't really stitch an Afghan in summer, it's just far too hot. And finally, I made a really dumb mistake - there are only 25 squares on this Afghan and of course 26 letters of the alphabet, which I didn't click until half-way through! So I'm having to redesign a couple of squares - I've decided to combine U and V because the cat for V is a Vicar and we didn't want that, being of a decidedly secular turn of mind. I've drafted a version out which is basically the U chart with a V intertwined in a different colour, and will probably just stitch some violets on. I'd like to do a violin but I can't draw for toffee and haven't found one I can cannibalise yet.

Anyway, here it is, and a close-up of the G to finish. Each square is probably 15 or 20cm square and can take anything up to ten hours or so, there's a lot of shading on the cats which is quite fiddly. Incidentally I picked this alphabet because we have one grey and one ginger cat. The series is by DMC and is called Marmalade Cats. One day I will get it finished! 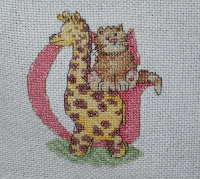 I just love your afghan I am sure that you will get it finished, the design is so cute.
I have two afghan fabrics and not yet started either, both I have and for over 4 years maybe one day I will start.
Anyway keep up the good work I love your blog and your work

Thank you, that's very sweet of you! It's very rewarding to work on such a huge project when it's modular like this - I remember getting a bit of a buzz each time I finished a letter (or maybe that was because each one meant my baby was that bit closer, too :)) I can't believe she's 14 months already. Still, I should have it done by the time she's ready to learn the alphabet!

It does leave me with another problem though - if we have another child it's only fair to do something similar for them. How will I ever get that finished!!