The last couple of months of work 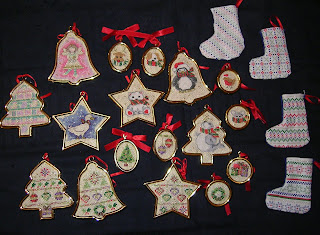 Here are my finished tree decorations. The framed ones are from CrossStitcher magazine, iirc - two complete sets (cuties and samplers) and a couple of odd ones as I had extra frames (fairy and goose). They're on 14-ct cream and gold-flecked Aida, which was a bit of a nightmare as they used tons of DMC Light Effects threads and it was often hard to see. The stockings are from Mary Hickmott's New Stitches magazine and are currently filled with sweeties on the tree. There were supposed to be six of those, but I pinched one for the Secret Santa on my favourite parenting site I Want My Mum, and the other I stitched a friend's name onto as part of her gift. Not that I've caught up with her yet so I may be able to get a snap of that too.
I'll probably end up stitching more of the stockings next xmas, they make nice little gifts I can get together in a night or two. 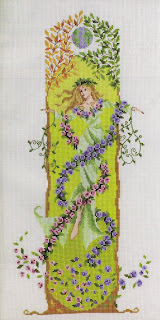 Naturally I got something crafty as a gift myself - my family bought me the Derwentwater Designs Foxgloves panel, to match the Delphiniums I got for my birthday. Both are cross stitch on 28-ct linen. I've had a go at evenweave before and found it really difficult, but I think that may have just been the piece in question. That was the Earth Goddess design (right - this is a scan of a photo, not the finished piece) from Cross Stitch Collection in about September and is currently my Round Robin piece. A Round Robin is where a group of stitchers get together, choose a piece each and then pass them around with each person doing part of it. In my case, it's 1/6th of the design. For the Earth Goddess I stitched the lower central section, from the arms down to about the waist, where the flowers on her wrists stop. There was a lot of blending and tricksy backstitch in there. 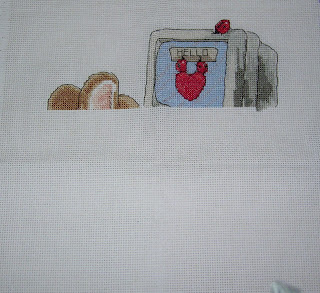 Here's a pic of the first one for someone else I stitched on (left). This is the Country Companions Tom Mouse character, the design is called "Computer Whizz" and it belongs to a lady called Amanda. I stitched the right-hand side where the computer screen is. This is just on 14-ct Aida so it was pretty quick to do. 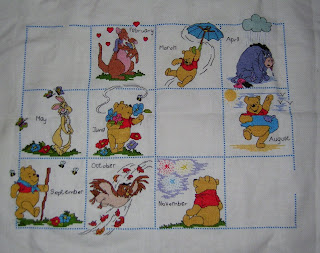 And here's the second piece, Vikki's Winnie the Pooh calendar (right). I stitched "May", as it's my birthday. This one was more difficult as it's on 16-ct Aida and there were a lot of really annoying fractionals in the butterflies. Usually I'm pretty lazy with fractionals and get away with not changing needles, but for this one I really needed a sharp. Cue lots of pricked fingers and swearing.
Posted by Caroline at 10:28