Out Of The Loop

I feel a bit blindsided by this week, and to be honest, there's no real reason to feel that way. K is back in school for the last leg of Reception, I'm back to working Saturdays after half-term with classes booking up rapidly for September, and we should have a clear run of regular routine for a while. But I have this sense that so many projects and committments are slipping through my fingers, even though I haven't really got a lot going on. I think I probably hang out too much on Pinterest...so many beautiful things whizzing past my eyes, so many projects I want to do that I can't find the time for. My dreams and the idle-cycles of my brain (you know, when you're powering down at night) are really vivid, too. So much colour - and so much frustration that I really don't know how to get this down onto paper. Or any other media, really. The last two weeks are littered with experiments and failed projects. I learn something each time but it's very unstructured and I don't feel like I'm getting anywhere - certainly a long way from having that "voice" that makes you an artist rather than a dabbler.

The drawing challenge is going...spottily, I'd say. I've had a few successes like this: 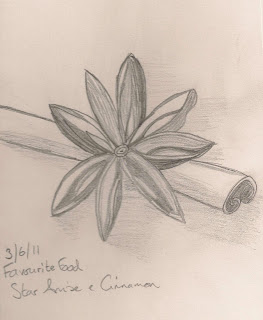 ...but I've found the first week or so's topics ridiculously hard to come up with ideas for. I really don't have "favourite" anything much - no book I could rank as "best ever" (how could I, when I haven't read all the books?), no film that I'd always watch whenever it came on. So even deciding on something to draw before I get the pens out has been hard work and I've let it get away from me. For my recent birthday I bought Drawing Lab for Mixed-Media Artists: 52 Creative Exercises to Make Drawing Fun

which is, I hope, closer to what I'm looking for. I need to be able to draw so I can do stuff with the drawing, not to have an image on a page (nice as that would be).

The button swap is moving along slowly and I do hope my partner Meridian Ariel will forgive me for being a bit tardy...I finished one piece the night before last but I'm waiting for some teeny-tiny buttons to arrive; I think they may just be the final tweak it needs. I've been distinctly uninspired so far - mostly due to paucity of button stash (which was fixed yesterday as I managed to pick up a nice lot on eBay and some lovelies from Debbie Cripps), but also because...well, I really like Apryl's drawing and I was feeling a bit intimidated! You always want your partner to like what you make but sometimes it's really important to you.


On a final note of feeling totally out of the loop, I've really been neglecting my Etsy shop - for the last year since baby D arrived, really - so I hadn't even noticed there was an "activity" button. I got featured in two treasuries! They are Gingham Summer and Keep It Tidy. I'm so chuffed!


PS This blog is now optimised for mobiles, apparently - let me know how it looks as I don't have one of these fancy phoneamajigs.
Posted by Caroline at 10:36