And safely received, so here's what I made for Meridian Ariel (picture-heavy entry, this one): 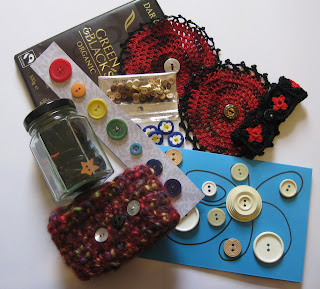 Almost the whole box...
Can you spot the sneaky peek from the last entry?

Let's see...Stash Goodies: a little jar of vintage black buttons (for Apryl's dolls) and some rather newer Dress It Up stars (for fun). A strip of single buttons in a rainbow from my stash, just cos I felt like it (and it was all getting a bit monochrome at that point). A packet of Dress It Up Tiny Rounds in "Natural" - again, I was thinking of the dolls as it seemed to me the natural woods would look good against the tea-stainy, antiqued fabrics. Ditto the white/cream buttons wired onto the card - they're a mixture of mostly vintage I've found here and there, in as many pairs as possible for eyes. Oh, and there's half a dozen millefiori Fimo buttons I made myself a while back. 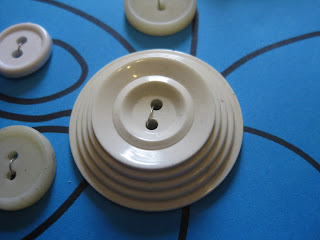 I've had this button for ages and never known what to do with it, but it made a great centre for this card. I always wonder what it came from originally...a winter coat, maybe? 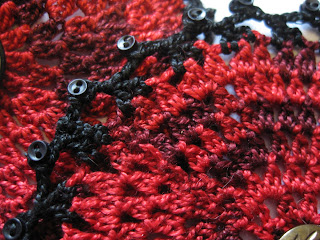 A pair of coasters from Kyuuto! Lacy Crochet, using Anchor Perle no 8 in varigated red and Anchor Perle 5 black. The black buttons on this are miniscule, about 4mm across, and had to be stitched on with a beading needle. These, and the tiny rounds and stars above, are all from debbiecripps.co.uk
Stuff I made: Apryl's tweets first thing in the morning are invariably about coffee and since I'm often disturbed in the night by at least one of my girls, they always raise a smile! So my plan was to make a coaster and a coffee cup cosy for those out-and-about cuppas. Except I screwed up - I made the original one, with all those teeny buttons, and put it in the mythical Somewhere Safe to dry after starching. And then forgot where Somewhere Safe was. After ransacking the house I gave up and started over, kicking myself as I didn't have enough teeny buttons to make it the same way. Whaddya know, when I went to put the completed second coaster into the box with everything else...there was the first. So I hope Apryl has two desks or something, hehe.

Big red button on the coffee cup cosy. Again, had this one for ages but always thought it was diamante...turns out it's more like milled or impressed, and a lot more steampunky than I'd thought. The yarn is a chunky burgundy with rainbow flecks I had left over from a hat; nothing more than simple double crochet. 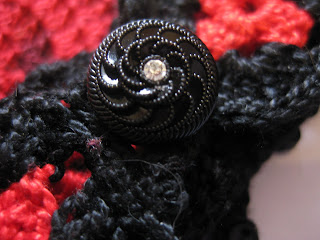 This is the one I was most worried about because it's hard to make accessories for people you don't know - if nothing else you don't know their measurements!But this button was crying out to be a gothy-ish closure on something. It fits closely on me and I have fairly big wrists, so here's hoping. It's just made with simple little granny squares in Anchor Perle no 5. 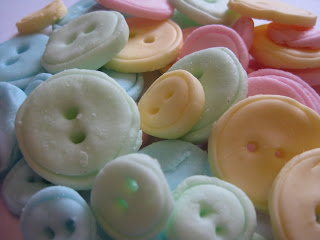 I had fun making these! Neither of us are really pastels people but it takes a LOT of food colouring to make deep colours and I'm not that patient (and doesn't the blue stain your hands for ages!!). I happened to have borrowed my mum's Briar Rose flower cutters a while back and they were the ideal size to make big and little buttons. They're not in the picture with the rest of it because I was still scrabbling around for a box at that point, but as with the little glass jar, the packaging from my last Trufflepiglet order (you must try the Gingerbread Truffles, om nom nom) was just perfect!


Anyway, that was the button swap. Whilst I was doing that I also put a wee gift together for the lovely Victoria of Baby Bean, who has new work lined up - and what better for a new desk than a pretty mug, coaster, cup cosy and some yummy stuff to drink and nibble. 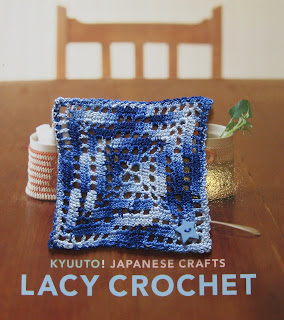 Star button detail (I'm getting better with that macro setting, no?) 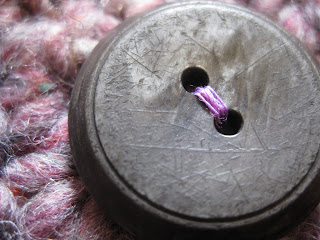 One last gratuitous button shot from Victoria's coffee cozy. I wonder what this scratched-up vintage button has seen in its life - and where it'll go next!

Big thanks to Kitty Ballistic for organising and everyone at Crafteroo for joining in! If you'd like to see more of the swaps, go here for a list of blog posts.
Posted by Caroline at 19:56

thank you so much for my beautiful button swap. I haven't blogged yet about what I made or what I recieved but I hope to get around to it tommorrow as this week is so manic. and I need to run out the door and get to school in 15 minutes to sort out the PTA accounts, my husband is the treasurer but is terrible with numbers! I love everything so much. In fact I'm going to help myself to a few mint buttons before I run off to school. I had a blast with the swap once I got going with it. Thank You

once i got going i really enjoyed this swap - swaps can go two ways for me, either totally clam up my creativity or give me a burst of enthusiasm this one definately the latter :)