Observation Is Not The Same As Practice, It Turns Out

Wheee! So it turns out that 10+ years of watching my mum make the most incredible cakes but never doing it myself is rather like driving a car having only ever studied theory (albeit for many years). What do you think? 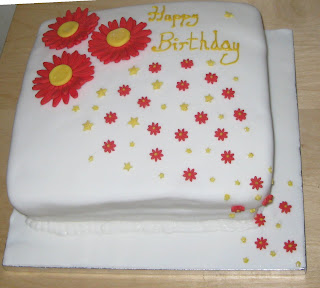 I don't think I've done too badly, considering...I've never even baked a cake that size (10ins), let alone covered it (four attempts, you can't see the dodgy sides from this angle) or held a piping bag in...probably 20 years (which is why the shells round the edge are so rubbish - icing sugar was too wet). Those gerberas were absolute hell, I really should have used gum paste rather than ordinary sugar paste. You can't see from this pic but all those little stars are sparkly, which lifts it a little. It took hooooooooooours and I'm completely knackered.

The party's this afternoon - mum & dad have been on hols this week and mum's under the impression it's her brother's 30th wedding anniversary party tomorrow afternoon. I have "reluctantly" agreed to go along to show off D and catch up with my cousin after his trip to PAX2010 (for the geeks amongst you he met the awesome Wil Wheton and I am sick with jealousy). So far we think mum doesn't suspect a thing. We've been planning it for months - K found out accidentally two weeks ago and has been absolutely amazing at keeping her trap shut to mum, bless her.

Not to be outdone on the cake front, K pinched my cutters and together we made these fairy cakes: 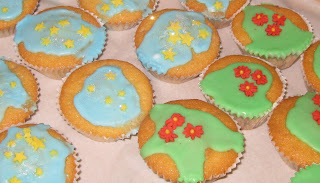 Wow - I think you did brilliantly!