What We Made For The Cat Swap!

Aah, our parcel has arrived safely in Scotland, thank goodness - and all in one piece, phew! See what Kirsty & Devin thought of what we sent here. Kirsty's pictures are much better than mine so do take a look! 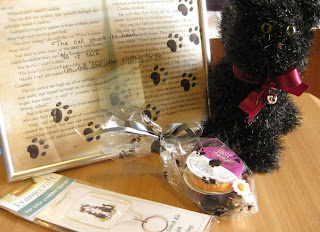 What I made for Kirsty

I'll talk more about the picture in a minute, but just wanted to mention that the cute kitty is made from a pattern by The Ole Attic Chest on Etsy - it was one of the first things I ever bought on Etsy and although I've been wanting to try it out for ages it just never made it to the top of the pile. In a way it's been a good thing, though, as I've built my confidence on yarn substitution quite significantly over that time. Mine isn't as fluffy as it's "supposed" to be, but the Stylecraft "Caberet" yarn really made me think of how cats aren't always sweet little kittens...this fellow is a teenage cat bristling with magic and adventure.

I included the cross stitch kit as I knew Kirsty was interested in trying different crafts and I figure these little kits are a great way to sample something without the fatigue factor which often comes with cross stitch. 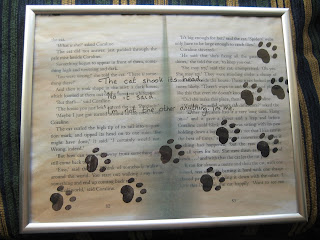 I was really pleased with how this came out - and by how much it was appreciated! It was one of those ideas that came to me in the middle of the night (which I see a lot of, being heavily pregnant now!) and took quite some experimenting to get the exact combination of water and ink stain which would make the page look age-faded/charred rather than as though I'd dumped a pot of tea over it! I'd also considered using a page from Rudyard Kipling's The Cat Who Walked By Himself, which I've always loved, but knowing how much Kirsty liked Coraline it was an easy choice. I may make one for myself, actually, though the copy I have of Kipling isn't as nice as I'd like it to be in terms of the font and layout. 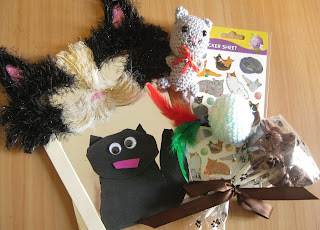 What we made for Devin

Definitely a joint effort, this one - K made the card entirely by herself, she's getting really good with scissors now. Everything else she either did part of or had all the creative input for. She painted the bottom coat of the cat mask herself - and how we grinned when a blank version of the same mask arrived in our parcel from Devin - she's already part through a Wilbur from Winnie the Witch mask and now she's keen to raid my yarn box to make a ginger cat too! She was very definite that the cat mask should look like a Jellicle Cat - we got the new Axel Scheffler-illustrated version of TS Elliot's Old Possum's Book of Practical Cats

last time we were at the wonderful Seven Stories and it's a firm favourite.

What else...the amigurumi Pocket Cat is from Amigurumi World, so I made it as K is not quite up to crochet yet, but all the decisions on colour and so on were hers. Ditto with the cat toy, which we made for Devin's gran's cat Clyde :D I mostly made up the pattern for that but major props to the user Windy on Something Awful - probably not a place you'd expect to find a big bunch of people armed with hooks and yarn but the world is an unusual place to say the least! Tomsk very much enjoyed the prototype I made beforehand even though he was obviously poorly at that stage, so I'm doubly grateful to Windy for the idea.

K also chose the cat stickers, of course, and was instrumental in helping with the chocolate lollipops (yes, we did a test batch for her first!) - kit for making those was bought from Jen's Chocolate Making Factory on eBay, who I'd definitely recommend for speedy service! We borrowed the edible glitter used for the eyes and noses from my mum, a long-time cake decorator. They're great fun to make and I think we'll probably do this sort of thing instead of party bags - at least, I'd love to *think* we will; whether we'll have time when Little Bump comes along I don't know!

So there you go - much fun had in the making and receiving of another swap. I doubt I'll be able to do another in the next year so I'm glad it was such a good one! Many thanks to Chrissy of Spoilt Pig for organising and to Kirsty & Devin for being such great partners.
Posted by Caroline at 10:53

I saw Kirsty's post, what lovely items :) I'm loving the mask most of all, it's so fuzzy like a real cat!

Thanks! The mask is from the same yarn as the black cat plus some Sirdar Zanzibar. Absolute hell to work with whatever you're doing but the final effect was pretty good, we think.