Crafteroo are running special threads on a Thursday night at the moment - one for specific projects and one as a check-in for big works-in-progress. As I mentioned in my last post, I've been trying to get my head around how I'm going to organise the amount of work I have to do vs the amount of stuff I want to do for myself, and I decided I could use these ideas to keep me on track. In an ass-backwards way, of course, cos that's the kinda gal I am.

So for most of the week I'll be concentrating on the big stack of commissions which need doing - I've got really behind with those because of Little Bump's making me so tired. Unfortunately until they're done I'll need to spend five or six nights a week on them, so I'm afraid there won't be as many random "I made this!" posts for a while.

To keep me sane, and to ward off crochet-induced RSI, I've decided to use Thursday nights as "project for me" nights. I've chosen a new cross-stitch from my rather ridiculous stash. This is the Heritage Crafts kit of John Clayton's Owl In Flight, which you can see here (2nd row down). I got this kit with the gift tokens I was given when I left work on maternity leave with K, over four years ago, so it's time it got done, really! I made a start over Christmas when all the gifts were done, and this is what I managed over the holidays: 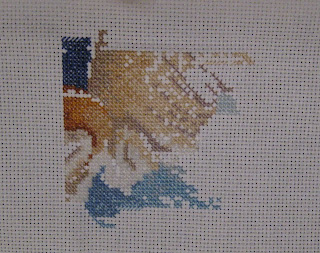 Quite a few night's work in there, which doesn't look like much, but you should be able to make out the right side of the owl's head. 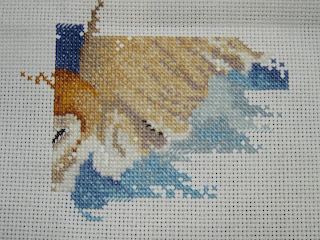 Just look at the detailing on those feathers! I filled in a lot of the lower wing and some of the sky. So far this measures 10x8cm - the whole image is 34x34cm so I have a looooooong way to go yet. But it's nice to get back in to cross-stitch after all this time; it's not as quick or easy as crochet (I find it takes a lot more concentration and I've had to do a lot of unpicking already!) but it's just as rewarding.
Posted by Caroline at 09:42

This is a beautiful deisign, you'll love it when it is finished. Enjoy stitching it