So you might remember I took part in the Span's Stitchin' Granny Square Swap back in July - goodness, was it so long ago?! Well, I have finally made something with the squares I received from Sam over at Incy Wincy Stitches! I'm really chuffed with this - whilst it may seem an odd thing to do to some of you, I can't explain how much pleasure it gives me every time I even see it, let alone use it. 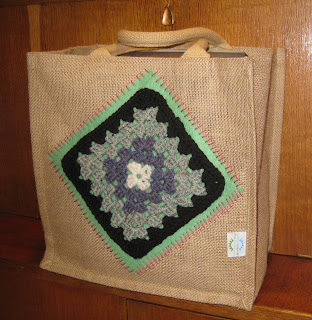 Way back when I was 12, a kid in my English class gave a talk on the Dungeons & Dragons roleplaying game. Having whizzed through the junior fiction shelves of the library, I was attacking the Fantasy and Horror shelves in the adult section with gusto, so dragons and elves and magic were right up my street. Previously my only encounter with D&D had been right at the beginning of ET, but it caught my imagination like nothing else. No doubt John has completely forgotten about his English assignment twenty years ago, but I remember it very well (I don't remember what I talked about, though!). At the time I didn't have the courage to go and ask him about it, much less get involved in a game (and to be fair it did seem like a very chess-club-boy thing to do and I wasn't quite that geeky), but it was something that lodged in my brain.

Then I went to uni and met some nice folk; naturally there was a cute boy involved and one night I went over to their flat. They were just setting up for a game and, well - you remember this guy (second photo)? He uttered the immortal words "If you're staying, you're playing". Jeez, you didn't need to tell me twice! Two love affairs began that night and you can guess which one lasted (since I married someone else!). I played probably weekly for a good two years; went through quite a few Elven Clerics and even had a go at both running my own games and live-action. When I moved to Edinburgh I did some live-action up there, too, though I found it hard to fit into a national game with all the study I was supposedly doing.

Time passed, people drift, and Facebook happened. One of my first friends on FB was Mark, who'd been my lab partner at uni. I knew he was a freak like me :P but we'd never played together. And guess what, he was setting up a new game and it was within driving range. So now I am happily back playing, with a new group, a new character and a new adventure (but my orignal dice!).

A new adventure needs a new bag, right? Whilst you don't need much for roleplaying beyond your superbly creative brain, you do need a notebook, pencils and dice, and it's nice to have a Player Handbook and a few snacks. I'd got a hessian bag from a supermarket after seeing this embroider a bag piece a few months ago, but couldn't decide what to put on it. Then I suddenly realised Incy's granny squares were the perfect size to cover the shop logo on both sides. I backed two of them with contrasting felt, stitched them to the bag, and voila - a completely unique bag to put all my RPG stuff in! 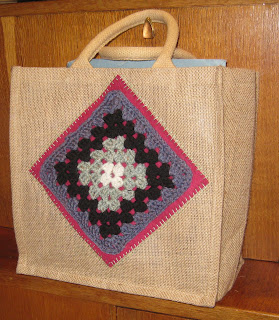 It may not look like much and it may seem weird to you reading this, but this is extraordinarily special to me (and the best bit is that if the handles go, I can simply move the squares to a new bag!).

What to do with the third square, though? Well, I am usually to be found playing a magical character of some kind - mostly a cleric - and I hate flipping through handbooks to find my spells, it's so slow. So I made some spell cards; just the salient points on index cards. I know you can buy fancier things in the shops but I always find writing something out helps me to be familiar with it and that does speed up the game somewhat. So I made a spell pouch from the last one to store my cards. 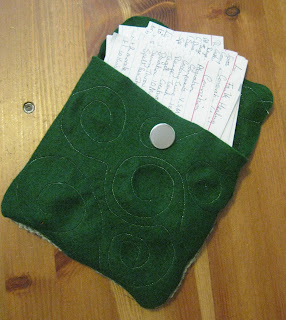 Front side of pouch, machine-embroidered in metallic thread (my first go at that!) and skilfully hiding the worst buttonhole in the world (it broke my needle!) with my spell cards. 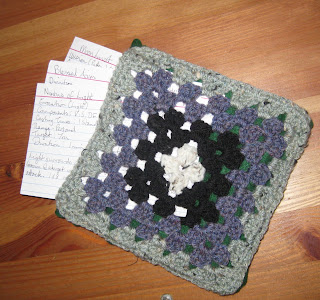 Rear side of pouch with granny square feature - I deliberately left one side of the square open so I could slot in spells that I'd used during the game rather than constantly getting muddled!
So there you have it - definitely not your granny's bag and something which brings me enormous pleasure even if everybody in the world thinks I'm bonkers!


Today I'm bookbinding and then heading off to Mark's for the next session tonight. Game on.
Posted by Caroline at 12:41

they are great! I still didn't do noting with my ones :(

the bag looks fab... I never played D&D but have always been a voracious reading of sci-fi, horror, and fantasy... oh and I did go on a LARPing weekend with some friends who run a LARP company.. it was ok but I'm not good in social situations so I said my line I was a lady vampire... and a pirate.. and mostly I entertained the kids and stayed out of the way!

Aw - Izabela, inspiration will come :) I tracked down some of the same yarn as the ones you made for me and I have Big Plans but no time - it is very much in my head, though :)

lol at LARPing - it can be a hard world to get into; I didn't do much tbh. I prefer to stay warm indoors with no face paint. I did rather like the latex swords though!

definately not your granny's bag!
it looks great.

What another fantastic idea, and great to use them on something you'll see every week! And what a great good luck charm!

oh well done you! they look great :)
really must get mine out and do something with them!!
x

Ingenious! I love both ideas. Your projects have turned out fantastic.