Hurray, I can finally update this with some of the baby gifts I've been making. Months and months ago I aquired half a dozen or so balls of dusky rose Cashmerino. Now, I strongly dislike pink for myself anyway, but particularly for my little girl because it's so ubiquitous (no need to wonder why I'm a fan of Pink Stinks: The Campaign For Real Role Models - at gym this morning K was the only one of five girls not dressed from head to foot in pink. What's that about?! Rant, rant, rant). So I put it to one side, wondering what on earth to do with it since I wouldn't use it for me or K, and promptly forgot about it. It is a lovely rose, actually, I just object to that horrible sickly pink being everywhere so it's not exactly the first colour I reach for.

Then my lovely friend, who's mum to one of K's favourite playmates - another blonde K, they're like the terrible twins when they get together - announced she was expecting another little girl. She's going to be called Daisy Rose, when she arrives in the next few weeks. And with a name like that, there was only one thing to do - buy daisy buttons for a rose-coloured ballet cardigan. And a hat. And some Mary-Janes. Once I got started I just couldn't stop and I'm afraid I spent quite a lot of time going "squeeeeee!!!!" over the teensy baby clothes! I couldn't crochet when K was small and her own ballet cardigan is a size 3-4 so it took quite a while. Daisy's worked up almost instantly. As ever, these patterns are all from
Crochet in No Time

; it really is my favourite ever book so far. The buttons I picked up on eBay.

The package was delivered today and much fun in the garden was had by all - paddling pools, chocolate cake and evil pirates (er, that'd be me, although it was K & Daisy's dad that ended up walking the plank at the point of two garden canes!). So I can finally show it off. Here you go! 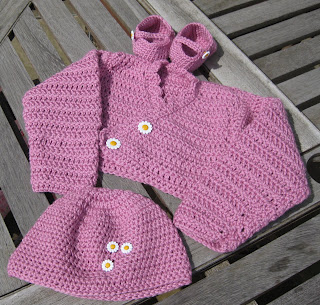 And now - on with the granny squares! I've made two already and they're just waiting for one more before they head off to America. How exciting!


Eta: See what Littlestuff had to say about this set at their Blog Love post! How cool is that?!
Posted by Caroline at 20:53

Hi Caroline
I have just discovered your blog and just love your 'stuff'! This set is utterly adorable - in fact, I love it so much that I have made you this weeks 'Blog Love' post on our blog!

Oh, how exciting! Thank you very much! :D