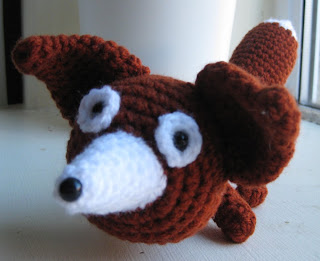 I feel like I've been making this little fella forever. For a creature which purports to be a "Tiny Yarn Animal", he's almost a foot from nose to tail-tip!

Admittedly I've used a fairly thick DK yarn for him, so I was expecting him to be bigger than the estimated 7ins in the book.... 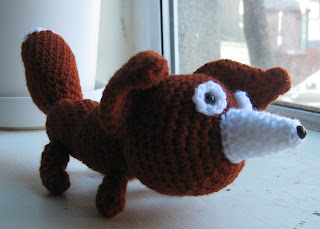 ...but this is a tad ridiculous! 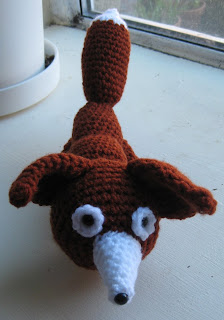 Like other things I've made from TYA, he does seem a bit disproportionate - ears and head are much too big and the tail has clearly been scaled up to balance that. He is terribly cute but looks neither amigurumi nor full-sized soft toy to me - those poor little legs'd never outrun a hunt. Good job it's been banned, eh?!
Posted by Caroline at 18:59