I like crochet. I like working in the round, I like chunky yarn and big hooks. What can you make with these things? Hats. Even though I'm not a hat person; here are two more! 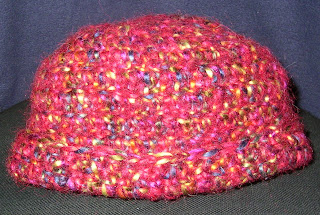 This is the "boy beanie" from Stitch 'n Bitch Crochet: The Happy Hooker

, which I really enjoyed doing as it was an absolute doddle - really I think this should be down as a starter project for anyone who wants to take up crochet because it's so simple to count. I did ignore the pattern a bit as it changes yarns to put stripes in and I just wanted a plain beanie made of this lovely garnet/rainbow wool. It's very cosy - probably doesn't suit me as well as the cloche hat but when it's snowing, who gives a stuff? 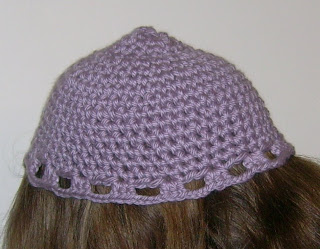 This is a cap from the superchunky cashmerino, from the book One Skein. Not a book I would recommend for beginner crocheters - or knitters, for that matter, since a lot of the patterns seem to be based on knitting in the round. I can barely manage k1p1 and there aren't a lot of crochet patterns in this book. So, somewhat disappointing at the moment but I'm hoping I'll grow into it. I think this cap is quite pretty but it doesn't fit very well - I had to use a 10mm hook rather than 11.5mm as recommended; despite that it seems too loose, not long enough and slips on my hair (which looks rather shiny in that pic: nice!). So I think I will frog out a couple of rounds and then add in extra length but fewer stitches. Or something.

I now have two crochet bag projects to complete - one is a finished item which needs photographing and the pattern writing up; that will be a free download coming in the next few days so add a bookmark now! The other is a shoulder bag from the Sirdar Eco Wool, which is tweeding up nicely - front is done, off to do the back/front flap and strap now. I am in two minds as to what to do with this one...whether it should be felted or not. I think I'm going to make it up without stitching the strap or decorations on and then see (...if I have two balls left to do it again and felt one and not the other...).

I need to get this Eco Wool bag finished sharpish because enough yarn for four projects will be arriving shortly...a hat for K, a shrug for me and two pairs of baby Mary Janes for friends who've just had babies. Oh dear.
Posted by Caroline at 21:10

Great hats! I agree about crochet... love it.

I share your affinity for hat crocheting. I just finished a hat today! :) Great hats. I'm loving that garnet yarn... :)

It's great yarn, isn't it? The pic doesn't really represent the colours properly, though, I must try and get a shot in daylight. It's a more reddish-purple than this and the rainbow strand is much shinier and more vivid. Good hat yarn, definitely...though I'm seriously tempted by a bag as well if there's enough left in the sale.