These pics are for Ali :) This is what I've been up to since Christmas: 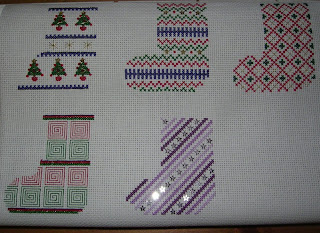 Here are five out of the twelve self-designed stockings, all stitched up and ready to be cut out and made up with felt backings. The first four are loosely part of a set of more traditionally-styled sampler sort of thing, using the red/green/sapphire/gold theme. The fifth is the first of a more contemporary set; actually the colours could be anything on that, really, to match your decorations should you be so inclined. I also have a set of characters (snowman, star, etc) ready to stitch which are all quite jolly! These have taken me about 4-6hrs each, basically not much more than a night in front of the telly or a couple of long train journeys, so fairly easy to knock up. More on the purpose of these stockings later...shhh. It's a secret. :)

I also realised I've never uploaded a picture of my very own-design birth sampler - it was done for a friend overseas; I wanted something which would grow with her, having stitched K's and then realised she probably wouldn't want it on her wall at 13. This is a very simple design, really, but pretty effective, I think. It has more impact when framed, but I didn't want to post glass to NZ really! 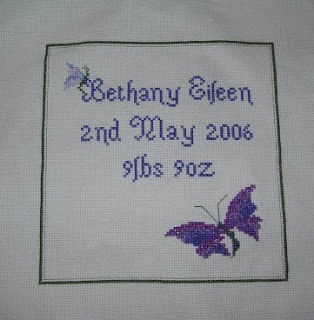