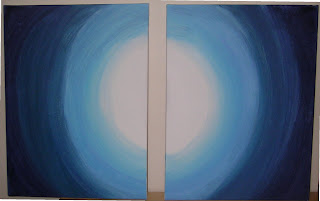 Two blue things, to be exact - I threatened to do some large canvasses for our room and here they are. Took me about an hour, and I had to do a bit of rescue work as I got too much water on there and the pigment started to lift rather than stay on. But I think it's ok - the blending isn't as subtle as I'd hoped for, though, which is down to a) me being being a complete beginner and b) using cheapo and probably crappy materials (the brushes were also probably too stiff, I will know for next time).

They're not in situ, just on the table for now, but you can get a reasonable idea from the pic.
Posted by Caroline at 14:25

Pretty blues. Where do you find the space in your house to display them all?

Well, these are going in our bedroom, which currently has nothing but one framed picture I've been dragging around from house to house since before uni! Tbh most of my cross-stitch isn't framed and up - framing is so expensive that it tends to get left and left. I am planning to take some of the pieces I've done for K's room shortly, though; it'd be nice to get eg her birth sampler up by her second birthday (next week!).