Tut tut. I couldn't hold out any longer - I've opened a new kit and I am having so much fun! I was enjoying Blessed Samhain but there are a lot of thread colours, which is complicated to travel with (they're not all carded, unfortunately), and anyway, I needed a break from all the orange on the pumpkin. Six shades is no joke!

Coming on, isn't it? 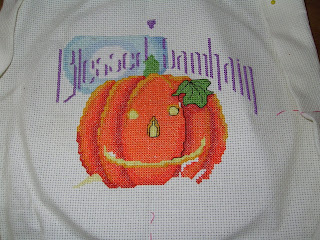 Anyway, I'm sure it'll be complete by Halloween this year, there's not all that much left to do. In the meantime I am working on the Bothy Threads Row of Fairies, which is ever so sweet without being terribly twee and Victorian. This again is for K's room, which has a jungle theme at the moment but I just couldn't resist this one. I think it'll be nice to have in for when she decides she needs a change, and there's a lovely matching number sampler which I just might get if she really likes these. Three out of seven fairies done in just three-ish sessions so far, so assuming I don't get too side-tracked I should have it done by next week sometime. 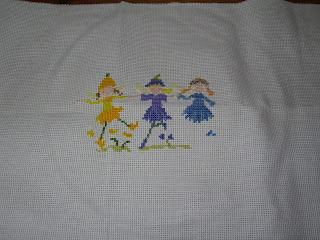 That was the sewing update, anyway! Over the weekend we visited family in Newcastle and went to the Baltic Centre for Contemporary Art, which was enjoyable not so much for the actual exhibits but for the responses they elicited. K particularly liked the Dazed & Confused vs Andy Warhol exhibit - well, actually she just liked the big video projections, which is about all you can expect from a 20 month old! The open spaces of the Baltic are very good (although I believe the centre was heavily criticised by my civ eng/architect BIL for poor use of natural light and so on); it certainly felt less cramped and "busy" than what I recall of my last foray into "modern art", the Tate Modern, when I was still at school. There was actually space to step back and get a feel for the scope and size of exhibits (and still conclude they were derivative, self-referential hogwash in the main, but that's just me). It's certainly a place I'll keep an eye on for future visits (and the chocolate sauce muffins in the cafe are rather nice too, even if the staff are in dire need of a spell checker).

Actually the thing which most inspired me at the Baltic was in the shop (ok, ok, stop rolling your eyes, this is important). They had some of the most beautiful Marimekko design items in stock; I very nearly fell for a black & white flower print scarf in the Pieni Unikko print. But my "small aubergine" complex kicked in when I saw the price and I realised that for the price of an "art" print on a rather small piece of cotton, I could easily buy a silk painting kit and reproduce something similar myself, thereby not only getting a nicer scarf but learning a new skill in the process. I am quite fired up about fabric design as a consequence and need to dig out a sketch pad shortly before the ideas disappear again.


I am not the only one feeling artistic at the moment. Dear Other Half has recently bought The New Drawing on the Right Side of the Brain

and the accompanying New Drawing on the Right Side of the Brain Workbook: Guided Practice in the Five Basic Skills of Drawing

. As a neuroscience postgrad I am naturally sceptical about anything claiming to tap into hemispherical skills, but the word of mouth so far seems positive. So much so that we will be paying a visit to the nearest art shop at the weekend to collect some basic equipment (pencils and the like). Drawing is not something I've ever had the natural knack for and is a constant source of frustration, so it will be interesting to see if this technique works; I'm sure I'll give it a go sometime.

Finally, given the horrendous weather, K has also been flexing her creative muscles in learning to scribble in different colours, stick stickers and stamp stampers. Here is the current display: 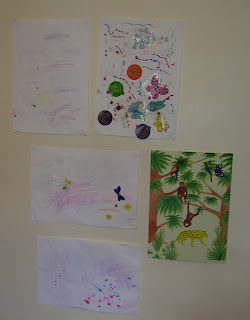