A Stitch in the Park

Last Summer, I spent a lot of time in the local park with K asleep in the pram beside me, working on various small designs which I then made into t-shirts. I also worked on this dress (the butterflies round the bottom, which repeat front and back), which was done for a wedding in August. K actually only wore it two or three times as she hit a growth spurt round about then, but it was enjoyable to work on regardless. 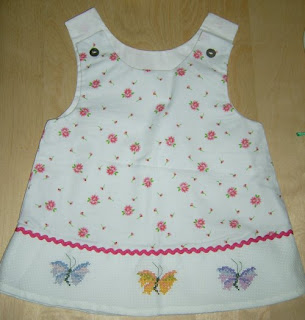 Unfortunately I had to replace the buttons as they fell off before she'd even tried it on, but que sera sera - my little red daisies looked much better. She was the belle of the ball (apart from the bride!). I did do a matching bib with her name on it but she didn't wear it and I forgot to take a photo before packing it away with the dress...nice keepsake, anyway.


In other news, Geisha is go-go and now has a head and all of the border done down to the centre line. I've started working on the kimono again, which is difficult but will be lovely when done. That said, my RSI is flaring up a bit so I may have to stop for a while. Quite how I'll cope without something to do with my hands, I don't know...I guess this is why a lot of ex-smokers knit and sew!
Posted by Caroline at 13:33

What a pretty little dress. I haven't got on to making clothes yet, but it is on my to-do list of thingsto learn how to do. Damn talented people... ;)