Gutted doesn't even cover it

"It's with some regret and not a little anger that I'm writing to let you know I'm leaving the Round Robin group. I finished stitching my Earth Goddess piece yesterday, having finally been able to get hold of some of the LE thread that went missing, and when I came to wash and press it I discovered someone's spilt coffee all over the bottom part of the design. I hadn't seen it before as I've been so busy I'd not looked at it in proper light other than the part that needed finishing.

Furious - and gutted - doesn't cover it. Obviously someone's tried to wash it out, but it is still stained; it can't be hidden by framing and will probably not come out. I am currently soaking it and hoping the sun will bleach it out, but what upsets me more than anything is that someone's done this and not had the decency to even let me know, let alone apologise to everyone else that's worked so hard on it. God knows, we all have accidents, but when I think just how careful I was with everyone else's work it makes me hopping mad, to be quite honest.

I can't bring myself to send my work out like that again, I'm afraid, so I will be leaving."


So no picture of the completed Earth Goddess right now as it's out on the line in the hope the sun will remove the stains. I am so upset...possibly I shouldn't have sent out a piece that I really really liked and meant a lot; to have an image of a Goddess that so many women have worked on is rather special. I just can't believe someone would spoil it and be so cowardly as not to even mention it...did they think I just wouldn't notice? It's really obvious, and since it's supposed to be a bell-pull, framing won't save it.


Here are a couple of other finishes, though - Lindisfarne and Meg, Mog & Owl, which K is currently wearing. Good job I got the backing on it last night as she went nuts when she saw it and insisted on wearing it today. Hopefully I can get a pic of her in it later on (she's asleep right now) as I'm really surprised and pleased as to how well it's come out. Never again, though - stitching on clothes is reserved for small motifs now, it just hurts too much! 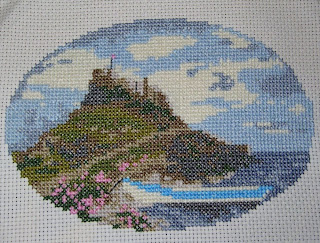 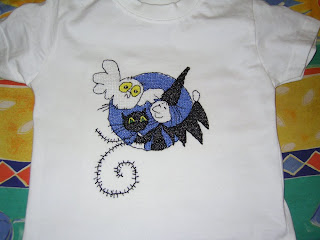 Last night I started unpicking Geisha Girl, I think I've sussed out where the problem is in the neckline - one too many rows. No idea how that happened but it's good to get going on it again. It feels more like a new kit than a UFO as I haven't done all that much on it. I was going to start Blessed Samhain - another UFO I failed to take a picture of - with it having been Beltane yesterday but I think I really want to get Geisha Girl done asap as it will look fab. Very sad to see Witches Stitches have gone out of business, I have their Star Maiden chart to do as well, but I had noticed they hadn't done anything new for ages. Very sad.
Posted by Caroline at 11:38