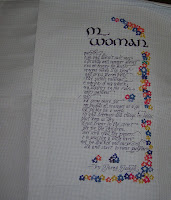 Half-way there...those flowers seem to take ages in comparison with the script. Anyway, there aren't as many on the left-hand side so hopefully it won't take as long. I still have all the leaves to put in, but thought I'd leave that fiddly part to be doing at the same time as the beading so that I don't lose my place (have yet to see if that theory works out!). Started the left-hand side last night and completed about three lines before Princess NeverSleeps woke up; hoping for a better run tonight but I have so much to do.

The new Round Robin piece arrived a few days ago, it's about a week early...don't mind at all, I quite like a piece to sit in the back of my head for a while before I set to work on it. It's a lovely-looking Oriental fan in autumn colours and belongs to a lady called Myrna; there are three sections left to do on it. Haven't decided if I'm going to complete the bottom half or do the centre upper third yet, but that'll be my next project after Purple is finished. I think I have only really a week left to work on Purple, all things considered - J's birthday is in two weeks, but the framer I've used before is in the next town over, so it's a bit of a mission to take it there and collect it again whilst wielding a toddler on the bus. Life would be easier if I could get there at the weekend as I'd have the car. The RR has to be complete for Feb 15th, so I do have two weeks in Feb to work on it before it has to go back in the post. I also have to think very hard about whether to join in the next one - I had sworn off doing time-sensitive work for a while, but the next one starting at Easter will have an Oriental theme (inspired by Myrna's fan, ofc), and I do have a couple of pieces in my stash that would work nicely for it. In fact, I have a beautiful Geisha that I'd started and then discovered I'd made a mistake on, so at some point I'll have to get that out and see if it would be suitable to send round. Sort of a cheeky way to get a UFO done, but you pay for it by working on other people's stuff! On the other hand I may sit it out and complete the Chinese Dragon I've had in UFO land for about five years; that just needs the tail on it.

In the meantime I've also been very busy shipping my daughter's journal over to Blogspot - it has a much, much nicer interface than what I was using before. That's here, if you're into cute babies. The Tarot site has come on well - all the spreads are designed and drawn out, the new "shopping basket" thingy is done (thank you dear), so right now I'm going to stop writing this and go away to write up some descriptive bits and pieces and some marketing glurge, yuck. Gotta be done, though.
Posted by Caroline at 14:39