Time I put some new swap buttons up! Yes, I am a glutton for punishment...no, not really. I had so much fun with the Granny Square Swap and I've "met" so many lovely crafters online through Crafteroo and Twitter that I really wanted to take part in these two. Besides, with having a lot of orders in for the same items, having a deadline to do something completely different keeps you fresh, I reckon. 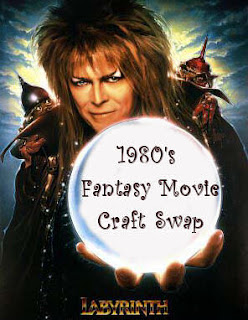 So yes, I will be doing the 80's Fantasy Movie Craft Swap over at Meridian Ariel's Blog - closing date's today! I've been seriously indulging in watching some of these films I remember so well from growing up (although my other half would claim I've put him through some awful rubbish, which I'm afraid to say is true in some cases!). I really love Brian Froud's work and look forward to drawing some inspiration particularly from Labyrinth and Dark Crystal for my part of the swap. I have a feeling an amigurumi may appear, but I suspect it won't be a Goblin King!

The second swap I'm joining in opened today and is a Button Jewellery Swap, hosted by the lovely Sam of Incy Wincy Stitches. Sam was one of the people who sent granny squares to me from the last swap, so how could I resist?! Buttons are somewhat new to me as inspiration - I have loads, like most crafters, but have tended to think of them as afterthoughts rather than focal pieces. Coincidentally - just as I was writing the email for the swap - Purple Sparkle tweeted about these and these sweet little fabric buttons, so I decided that I really needed to tip out all my buttons and see what we'd got (and whether I could justify buying some - ain't Twitter grand; will blog about the naughty little treats I've just bought for myself on Etsy when they arrive!).

Quite some rediscoveries, today - I remembered Sam had sent some lovely buttons and felt pieces which I'd intended to turn into a hairclip for K, so that was the first order of business: 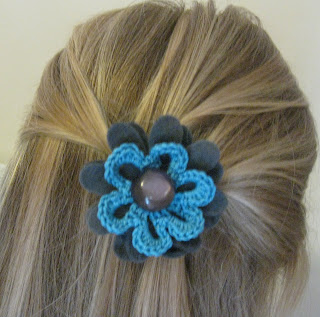 Hairclip made with the goodies sent by Sam of Incy Wincy Stitches - cheers!
Making this required a hairclip, which entailed no end of digging around in my bureau. It's been an absolute tip recently - I haven't been making much jewellery as I've not been wearing any, having lots of little kids around a lot of the time. K helped me have a good rummage and I ran across a wire dragonfly I'd made and then cast aside. At the time I couldn't see how on earth I'd get it onto a brooch finding without it looking ugly, and anyway I wasn't too keen on the twisted body. Somehow it just didn't look right. But amongst my buttons was a large, shiny mother-of-pearl circular piece which was just begging to be a moon. Twenty minutes with some 28-gauge wire, a few shiny green-blue beads and the dragonfly was in flight. I can't for the life of me remember how I twisted this one but I think I might be having another go if I can find some more of these buttons! 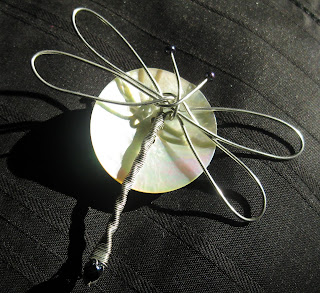 
Then I uncovered two strange buttons, more like bells or beads really, but they are indeed buttons - I still have the blouse they come from. Suddenly I knew what to do with the big green button that had also come from Incy's goodie pack - it had to become the focus of a velvet choker. I love chokers and am told they suit me - naturally I had a stock of wide black velvet ribbon tucked away in the bureau. Now I just have to find a few minutes to get the machine out and sew the velcro on to fasten it. It's not the greatest of shots, but you get the general idea here. I like that the droppers are offset rather than straight down the centre, it's a little bit quirky and different.

I think that's more than enough for one blog post! We're away to the seaside again in a few days so I really must get my head down and crack on with the orders - and with the cardigan for my friends' new baby in New Zealand, due any day now. I have nice buttons for that, too - if you're passing through Bury St Edmunds, call into Wibbling Wools, which is apparently new, and have a nosy. Lovely yarns and nice staff; I wish them all the best (and wish I had a shop like that on my doorstep!).
Posted by Caroline at 18:04

Can see why you are chuffed ... I love love love the dragonfly moon brooch!

wow, you have been busy today! ... also really love the dragonfly brooch :)

yeah i'm signed up for both of those swaps too! i spend many a happy hour fiddling about crafting with buttons sometimes it'll be years before they actualy become something!

It is difficult to make when there are children around. YOu have been busy and the pieces are beautiful.

Your dragonfly moon brooch is stunning!!

I've just been looking at your Etsy, love the out and about books, such a great idea!

Thank you for mentioning my buttons :-) x

Aw, thank you all :) I'm so happy with these - so nice to have a moment to make something spontaneously for a change.

hey im really chuffed to be your swap partner! :)