Apparently the Cantonese for "Congratulations and be prosperous" according to Wikipedia, not "Happy New Year". So happy Year of the Fire Pig, said to be a very prosperous and uplifting year for us Dragons. 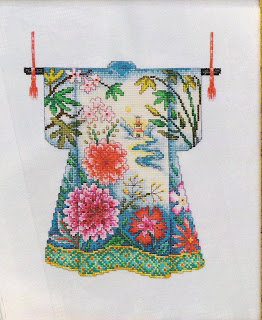 All very Oriental here at the moment - I've decided to take part in the next Round Robin after the current one ends, which is Eastern themed. It's funny, but I've found that having to stitch something for a particular deadline regularly is keeping my other stitching on schedule. I've had to be better organised, if nothing else, and really make the most of the short time I have each day. The piece I've chosen for my contribution is a gorgeous kimono from Cross Stitch Gold that I was really itching to do anyway, and it's another evenweave project. I have some fabric left from the Earth Goddess, and got all my threads through from the wonderful Lynxlove, I wish all eBay transactions were that perfect! Significantly cheaper than the big stores, too. So short of cutting the fabric, marking up the chart and stitching my bit, I'm all ready to go. Bizarrely K and I are both wearing tops with little girls in kimono on today and I've just finished reading Memoirs of a Geisha

again. Once I've finished reading The Good Women of China

, I do in fact have Liza Dalby's Kimono

ready to read. However, I can't see myself getting round to stitching the humungous Kwan Yin which is in my stash this year! I also have some really cute little Chinese Horoscope PINN kits - a dragon for me, a snake for himself and a rooster for K; I plan to turn them into a family sampler at some point (but that rather means completing our family first so there's enough space left, and who knows when that'll happen!).

In other news the Anything Goes round robin piece arrived a couple of days ago, which is a rather nice botanical study of a poppy. I am surprised, I must admit - there seem to be only two sections done and I was expecting to be putting the fifth part in; I do know one of the participants has been poorly recently though. I suspect this may also be the one that got lost in the very first rotation and is actually a substitute which had to skip about to keep up. Anyway, I'm going to complete the right-hand side with just the bottom of the stem and a few leaves, rather than tackling the flower head - someone's got to do it and I want to finish Purple this month anyway. I've done a bit more on that and now just have the last quarter of the beading to do, so once the poppy's finished I should be able to complete it before the last round robin piece arrives. My denim bag is also going quite well, I tend to grab that when other things have got in the way of an extended stitching session because there's only a needle, two bobbins of thread and a pair of scissors to unpack and put away each time. Not sure when that'll be finished but it's looking nice, anyway.
Posted by Caroline at 09:21

It's a beautiful piece, I really like it. I have seen a couple of beautiful Oriental inspired designs but haven't bought any yet. Not had time for much stitching at the moment although I like the idea of the round robin to keep things going.